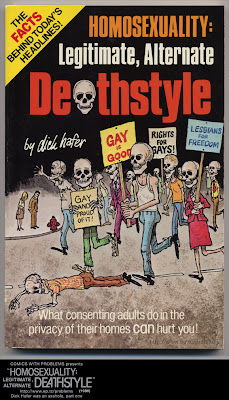 Something guaranteed to piss you off

I ran into something a while back that I have been itching to show on this site.

It is a representation of how far we have come and how far we have to go. You will recognize how some of the same arguments are still being used, although not as explicitly. Check out the comic's list of supporters shown on the last graphic.

You can click on the pictures to get a better view of the pages - more are at the bottom (even though I don't think it's work safe). And if you want to see the entire comic (God help you) go here.

Editor's note - The webpage featuring this comic is not anti-gay. It's a site that looks at "problem-based comics" from the past. 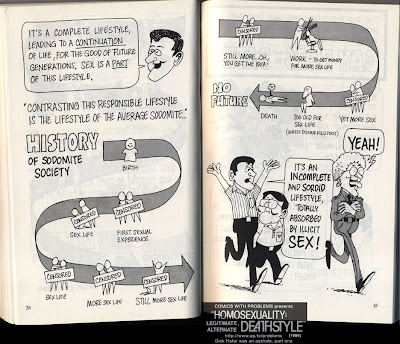 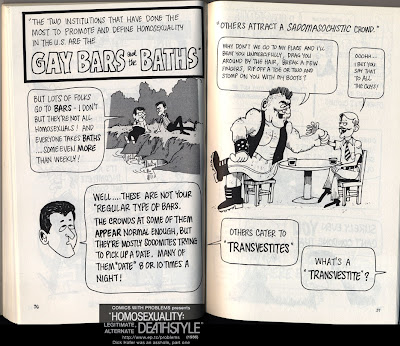 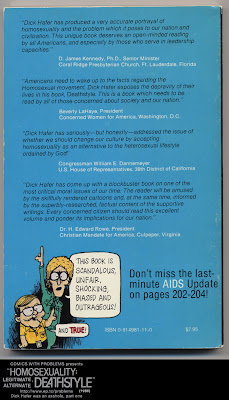 Posted by BlackTsunami at 4:38 AM

No offense, but if this comic were published today, it would go under the comedy section (fitting for a comic strip). True there is some edge to it, but in the end most of this is factitious garbage that's actually pretty good for a laugh.

My favorite part is the Life path comparison. So straight men have a short window of a sex life between marriage and children and gay men get to have it to they grow old? Really?

This is true, but still don't forget just how many people actually believe this stuff. I bet that on Free Republic, there are several posts defending the trash this comic pushes out.

I can't ever see this "comic book" going under the comedy section. I find it purely humorless.

Sadly there are people out there who still push tripe like this, though not in comic form. It's sick that we still have to fight this twisted mindset and pack of lies more than 20 years later.

Sodomites? I think "the Dick" must've attended the Paul Cameron School of Homosexuality Lies along with that other pious comic producer Jack Chick.

At least in their cases, it's one down, one to go!

In 22 years, no one from our side said anything about it? No one made a rebuttal? No one personally told Hafer what a DICK he was while he was alive? Where was GLAAD?

Remember that was in the late 80s and our community didn't have the power they do now. If someone came out with something so blatantly evil right now, all HELL would break loose and deservedly so.

I found this absolutely hilarious with multiple lmao moments. The sheer absurdity, espescially the last endorsement!

I guess it's a perfect example of cry or laugh. It's tearfully sad the level of ignorance one would need to actually believe this stuff, but to me, a very politically active liberal 45yo gay man, this is comedy gold. I will go to the full comic and share the link with my circles.

Moderate conservatives who favor civil unions should read this comic in front of a mirror.

Wow, I just found this. That comic is the homophobia version of Streicher's Poisonous Fungus.

Can we all please take a moment to realize that the author's name is "Dick Hafer"? If it were modern I would have interpreted it as satire, based on what I would think to be a clever pseudonym.

That website didn't post the entire thing. They left the part where they promote gay "cures". You should get a copy yourself (I think you can find them from Amazon or other websites) and give it a more throughout dissection.