Media Matters nails it again with this handy guide on The Do's And Don’ts On Reporting On Anti-Bullying And Nondiscrimination Protections For LGBT Students.

If you want to read about these items in more detail, Media Matters breaks it down very nicely:


Supreme Court asked to hear Gavin Grimm case - When it comes to lgbt equality, particularly our transgender community, our opponents are determined to go as far as they can. They just want to do it the hard way.

Determining whether or not an LGBT athlete is 'publicly out' isn't always simple - If only anything was simple with regards being out.

Australian Opposition to Push for Gay Marriage Law Reform - Get with the program and do the right thing, Australia.

Texas LGBT Students Say They Don’t Feel Safe Now That People Can Carry Guns On Campus - I don't blame them. I wouldn't feel all that safe, either.
Posted by BlackTsunami at 9:12 AM No comments:

On its blog, the Family Research Council recently promoted a report which came out last week. The report, which was falsely called a "study" claimed that the no one was born gay or transgender. FRC's promotion of this tripe was to be expected.

What was not expected was the backlash of comments FRC received. There was a small, but consistent, outpouring on the organization's blog calling out the report's errors and calling out FRC in general. One comment caught my eye because of its poignancy: 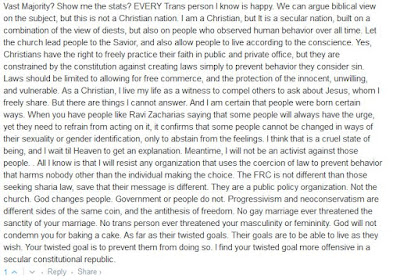 Vast Majority? Show me the stats? EVERY Trans person I know is happy. We can argue biblical view on the subject, but this is not a Christian nation. I am a Christian, but It is a secular nation, built on a combination of the view of diests, but also on people who observed human behavior over all time. Let the church lead people to the Savior, and also allow people to live according to the conscience. Yes, Christians have the right to freely practice their faith in public and private office, but they are constrained by the constitution against creating laws simply to prevent behavior they consider sin. Laws should be limited to allowing for free commerce, and the protection of the innocent, unwilling, and vulnerable. As a Christian, I live my life as a witness to compel others to ask about Jesus, whom I freely share. But there are things I cannot answer. And I am certain that people were born certain ways. When you have people like Ravi Zacharias saying that some people will always have the urge, yet they need to refrain from acting on it, it confirms that some people cannot be changed in ways of their sexuality or gender identification, only to abstain from the feelings. I think that is a cruel state of being, and I wait til Heaven to get an explanation. Meantime, I will not be an activist against those people. . All I know is that I will resist any organization that uses the coercion of law to prevent behavior that harms nobody other than the individual making the choice. The FRC is not different than those seeking sharia law, save that their message is different. They are a public policy organization. Not the church. God changes people. Government or people do not. Progressivism and neoconservatism are different sides of the same coin, and the antithesis of freedom. No gay marriage ever threatened the sanctity of your marriage. No trans person ever threatened your masculinity or femininity. God will not condemn you for baking a cake. As far as their twisted goals. Their goals are to be able to live as they wish. Your twisted goal is to prevent them from doing so. I find your twisted goal more offensive in a secular constitutional republic.

Posted by BlackTsunami at 5:03 AM 3 comments: