While under the radar of many, the recent loss suffered by the religious right over hate crimes legislation should resonate due to why they loss:

The lawsuit, in which two pastors and the head of the American Family Association of Michigan sued Attorney General Eric Holder, was dismissed on technical grounds. Because of this, however, Ludington did not reach the ultimate question of whether the law's penalty enhancements are constitutional.

U.S. Attorney Barbara McQuade, who serves as the federal prosecutor for the Eastern District of Michigan, where the case was brought, said in a news release about the decision, ''We are very pleased with the judge's ruling upholding the Hate Crimes Prevention Act. This law protects all of our citizens.''

The plaintiffs had argued that the law violates several of their constitutional rights, including their First Amendment speech and free exercise of religion rights, and the Equal Protection Clause, because, as Ludington characterized the argument, ''it creates an irrational distinction between different religious viewpoints on homosexuality.'' The plaintiffs also claimed that Congress lacked the ability to pass the law under the Commerce Clause.

The court, however, did not reach those issues because Ludington decided that the case could not be heard at this time, nor in a challenge brought by these plaintiffs.

The timing issue, called ripeness, relates to whether or not the harm claimed by the plaintiffs is timely enough to bring a court challenge. The issue of whether these are the appropriate plaintiffs was addressed by the judge in consideration of whether there is standing, which he found to be lacking.

Although the plaintiffs had not been charged with any violation of the act, which was signed into law by President Obama in October 2009, they sought a ''pre-enforcement declaration'' that the law was unconstitutional.

The court first addressed the standing question, noting, ''The Attorney General emphasizes that the Act prohibits only willful, violent conduct – 'willfully caus[ing] bodily injury to any person' or attempting to cause such injury 'through the use of fire, a firearm, a dangerous weapon, or an explosive or incendiary device.'''

After detailing the potential threats of prosecution claimed by the plaintiffs, the court concluded, ''Plaintiffs have not demonstrated that 'there exists a credible threat of prosecution' under the Act.''

In other words, portents of doom or claiming that pro-gay legislation will harm children, force people to "accept homosexuality, etc. may unfortunately work in school board meetings, on the editorial pages, and on The 700 Club or Fox News, but playing that game in court without proof just ain't gonna cut it.

And that's something to remember because based on my countdown clock on the right, it's almost a year anniversary since President Obama signed lgbt-inclusive hate crimes legislation into law and a pastor has yet to be arrested for "proclaiming homosexuality to be a sin." Remember the following poster: 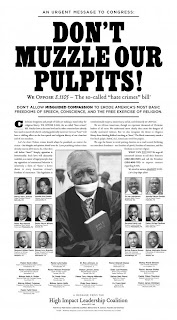 I wonder if Peter LaBarbera, Matt Barber, Gary Glenn or the rest would accept a nice piece of crow if sent to them wrapped in that poster.

It's just good for FRC that crimes against truth aren't tracked

They came, they protested, they got ignored: Anti-hate crimes legislation rally a huge disaster

Judge Dismisses Religious Right Lawsuit Challenging Hate Crimes Legislation - Just in time for the one year anniversary of the signing of hate crimes legislation. And how many pastors have been arrested? None.

Holder, Axelrod Denounce Florida Church's Planned Quran Burning - Not necessarily an lgbt issue per se but still one that affects us all. To some it may seem like a small issue but remember small issues have an unfortunate tendency to start big wars.

‘Ex-Gay is a Lie and Can Lead to Suicide’ - Unfortunately so true.

Gay DC Councilman, Jim Graham, attacked by anonymous, anti-abortion robocalls - Nothing like classic homophobia to remind you where you are in the world.

Yesterday, I prefaced this story by noting that the tea party finally did something write. Scratch that just a little:

Kristi Allen-Gailushas, secretary of the Big Sky Tea Party Association and Republican nominee for a Helena-area legislative seat, is quitting the group following its removal of president Tim Ravndal for anti-gay comments made on his Facebook page.

"They didn't even listen to Tim and what he had to say," she said. "They were just worried about the [Montana] Human Rights Network and the ACLU and what they were going to say."

The Montana Human Rights Network advocates for gay rights and had called for Ravndal's removal.

Ravndal was ejected from the group Sunday after a post on his Facebook page appeared to make light of the 1998 murder of gay University of Wyoming student Matthew Shepard -- a killing that has remained a symbol of anti-gay violence.

Allen-Gailushas said Ravndal wasn't even referring to the Shepard case, and that his comments were taken out of context.

She said she would submit her resignation from the association at Tuesday night's meeting.

She may have also been heading for trouble with the group’s board, following the revelation of one of her own Facebook postings that takes aim at gay people.

The Independent Record obtained an image of her Facebook page with her posting, "The Gay community wants a war…they've got one!!

I guess these folks just can't help themselves.

Posted by BlackTsunami at 4:58 AM No comments: Links to this post