And now a brief change of pace simply because though it's Tuesday, I am slightly burnt out. While I rest up, I want you to check out the above educational and empowering video from six months ago.

While nowhere near fulfilling my dream of seeing an androgynous black gay guy in leader and faux fur who can do karate, shoot big guns and manages to save the Earth while doing both, this video looks at a short evolution of LGBTQ super heroes and exposes the truth about the unknown queer factor in many widely known ones.

For those who say "why is this a big deal, " I have two things to say. If you are a LGBTQ making such a comment, report to National Headquarters immediately. Watching 24 hours of Bette Davis movies or the 1969 Cher movie Chastity and then Cher's appearance on Scooby Doo  back-to-back should reprogram you. Or drive you nuts.

If you are a heterosexual making such a comment, then just hush. An eight-and-a-half minute video on LGBTQ superheroes won't kill you, especially seeing that you don't even have to watch it. And don't even start with me about stealing the "innocence" of children reading comic books. If your kids can handle the fact that Iron Man is an alcoholic, I doubt the knowledge that Poison Ivy and Harley Quinn are getting it on will damage them.
Posted by BlackTsunami at 4:28 PM No comments: 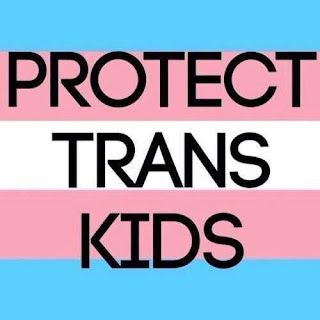 Critchfield said Livengood continued to harass and intimidate him, ultimately challenging him to use a urinal to prove that he was a boy . .  .

At the end of the exchange, Mr. Livengood said to Critchfield, “Not going to lie. You freak me out,” in front of the other students and the chaperone,” Critchfield said.


‘You Freak Me Out’: West Virginia Trans Student Says School Official Bullied Him In Bathroom - More details about the incident. For all of the instigation created by claiming trans students are a danger, it seems to be that the dangers are caused by those supposedly trying to "protect" others from these trans students.

Russian election trolls set up a fake hotline for youth who were coming out - If this doesn't get you angry, check your soul.


LGBT Youths at Substantially Increased Risk for Attempted Suicide - Can someone PLEASE point out how the anti-LGBTQ industry likes to cite things like this while at the same time undermining programs and things (i.e. GSAs) which would reduce the risk of attempted suicide.