Just now, Rep. Louie Gohmert made a speech on the floor of the House of Representatives comparing those who seek lgbt equality to Nazis:


So it is amazing that in the name of liberality, in the name of being tolerant, this fascist intolerance has arisen. People that stand up and say, you know, I agree with the majority of Americans, I agree with Moses and Jesus that marriage was a man and a woman, now all of a sudden, people like me are considered haters, hate mongers, evil, which really is exactly what we've seen throughout our history as going back to the days of the Nazi takeover in Europe. What did they do? First, they would call people "haters" and "evil" and build up disdain for those people who held those opinions or religious views or religious heritage. And then the next came, well, those people are so evil and hateful, let's bring every book that they've written or has to do with them and let's start burning the books, because we can't tolerate their intolerance.

I love ignorant, fake Christians like Louie Gohmert because he makes my task of exposing anti-gay propaganda that much easier.

Evan Hurst of Truth Wins Out brought this to my attention.

Maybe it's just me but if you are advertising a video featuring how people can supposedly change from being gay, certain images in its trailer such as the one below makes your assertions into a parody: 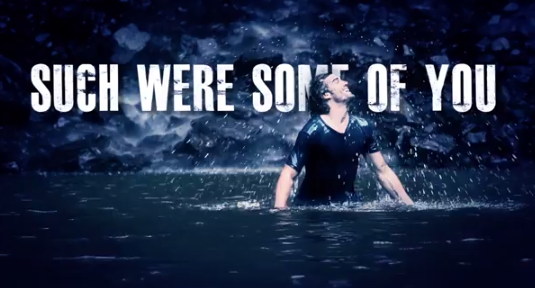 And the image of this strapping, sexy man with the water causing his clothes to stick to his muscular sexy body like a second skin is prominent throughout the following trailer, along with the standard bull we have learned to expect from the ex-gay crowd of activists and ministers - many of whom are featured in the video:

Posted by BlackTsunami at 9:55 AM 3 comments: