Faced with concrete proof of its plan to hinder marriage equality by driving a wedge between the black and gay communities, the National Organization for Marriage owned up to the plan.

With a deceptive caveat.

“The National Organization for Marriage (NOM) was formed in 2007 and has worked extensively with supporters of traditional marriage from every color, creed and background. We have worked with prominent African-American and Hispanic leaders, including Dr. Alveda C. King, Bishop George McKinney of the COGIC Church, Bishop Harry Jackson and the New York State Senator Reverend Rubén Díaz Sr., all of whom share our concern about protecting marriage as the union of one man and one woman.

“Gay marriage advocates have attempted to portray same-sex marriage as a civil right, but the voices of these and many other leaders have provided powerful witness that this claim is patently false. Gay marriage is not a civil right, and we will continue to point this out in written materials such as those released in Maine. We proudly bring together people of different races, creeds and colors to fight for our most fundamental institution: marriage.”

Brown obviously wrote that tepid response in sad attempt to quell the firestorm.

But not Maggie Gallagher. She said the following: 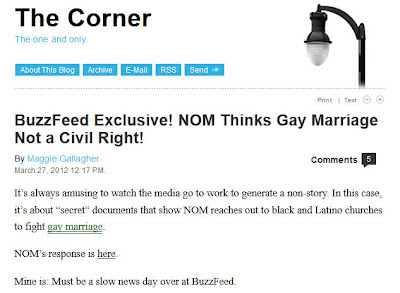 At least Brown tried to finagle in his lie. Gallagher's explanation to me amounts to a huge middle finger in the face of the gay community. Gallagher seems to be saying "Yeah we are doing it but so what. What can you do about it?"

Remember the words in the  document uncovered last night:


The strategic goal of this project is to drive a wedge between gays and blacks - two key democratic constituencies. We aim to find, equip, energize and connect African American spokespeople for marriage; to develop a media campaign around their objections to gay marriage as a civil right; and to provoke the gay marriage base into responding by denouncing these spokesmen and women as bigots. No politician wants to take up and push an issue that splits the base of the party.

And it's only because the document didn't state that NOM was hoping for something a bit more physical that I'm pressed to believe that verbal attacks by the gay community on black leaders is the only thing the organization wanted.

But I can't help wondering if there would be a NOM rapid response crew conveniently available if the disagreement between the black and gay community had turned into something more than simply verbal.

This was just plain sleaze. There is no other word for what NOM did. And all in the name of God and saving marriage.

But someone should tell me something - if NOM has to stoop to such sleazy tactics to "save" marriage from gays, then who is going to save marriage from NOM?

Hat tip to Joe.My.God for the graphic of Gallagher's response.

Posted by BlackTsunami at 3:09 PM 7 comments:

As more revelations regarding the disgusting tactics used by the National Organization for Marriage to impede marriage equality come out, let us do all we can to make sure people know about these things. Enough with the predictions of "this will be the end of NOM." Let's do what we can to make those predictions a reality:

Did NOM Hire Someone to Unsuccessfully Find ‘Victims’ of Gay Parents? - From Right Wing Watch comes another revealed endeavor of NOM.

Jeremy Hooper from Good As You has been running revelations all morning. Put on your wading boots and carry a good can of air freshner cause what NOM has been attempting is thick and it stinks:

NOM Strategy, Exposed: Please, lets get some thinkers up in here!

Top 10 Highlights From NOM’s Race-Wedging, Donor-Hiding, Victim-Playing Confidential Strategies - And just in case you need another break down of NOM's strategy, Think Progress is here for you.

“Bully” movie will be “unrated” after 475,000 petition MPAA to overturn “R” rating - A victory for a film which needs to be seen.

The blockbuster news which came out last night that the National Organization for Marriage was deliberately driving a wedge between the black and gay communities to stop marriage equality continues to disturb the hell out of me.

So many things bother me about it. It's not only the fact that NOM specifically said it wanted drive a wedge between the black and communities. It's also the fact that NOM was recruiting African-American leaders to speak out against marriage equality for the purpose of getting the gay community provoked.

So in essence, NOM didn't want these black leaders for their skill or intelligence. NOM was and is using black leaders as sacrifices or tokens in its war against marriage equality.

Wooden's comments is probably what NOM wanted because they drove a wedge.

Read more »
Posted by BlackTsunami at 4:53 AM 6 comments: