No matter what anyone in the Trump Administration says, the protection of transgender students is a federal issue. And whether some folks like the comparison or not (and I don't really give a crap if they don't), claiming that this is an issue best served by the states is not unlike folks who claimed that segregation was state's right issue issue.

And let's be clear as to why some folks are trying to claim that the protection of transgender students is a state's rights issue. They don't want to have to deal with the courts and have their lies exposes again; just like their lies were exposed about sodomy laws and marriage equality.

But this issue, and the issue of transgender rights in general has led me to take a new tact in communicating to people. It's a process I call "hand over." I could rail and raise hell, but I don't think it would be right for me to do that in cases where I should hand over the spotlight to folks everyone needs to hear from, which is in this case members of the transgender community.

Posted by BlackTsunami at 3:16 PM No comments: 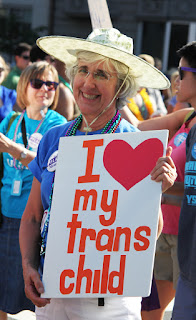 States Vow To Keep Protecting Transgender Students After Trump Rolls Back Rules - Wonderful! Transgender children need to know who has their back.


'You Are Not Alone': Celebs Stand Up For Trans Kids After White House Drops Civil Rights Protections - I generally think we rely too much on celebrity as a community. In this case, however, it is VERY necessary.

CNN conservative flops when challenged to explain where Obama’s trans bathroom rule has hurt kids - THIS is gold right here!

Gavin Grimm To Trump: Transgender Students Just Want To Learn In Peace - Listen the children before you believe the lies.

7 times Trump and his cabinet lied about their plans for LGBT rights - Okay, can we stop with the "Trump is good for gays" lie. If this man will turn his back on our transgender children, we are all in the bulls-eye.
Posted by BlackTsunami at 9:14 AM 1 comment: