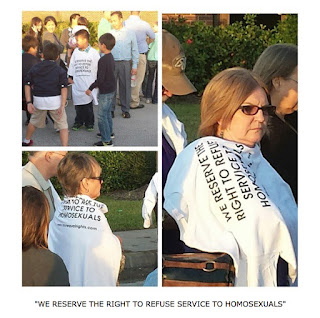 Daniel Summers, a gay pediatrician, has something to say about the new division of HHS designed to protect healthcare workers who refuse to give certain treatments under the grounds of "religious liberty." He pulls no punches and makes no apologies for his rejection of this idea.


In a piece published by  The Slate , Summers says the following:

If you are a healthcare provider who doesn’t want to treat LGBTQ people or their families, please don’t waste your time and mine applying for a job in my practice.

.  .  . Because many people justify their bigotry against gender and sexual minorities in religious terms, this new division is quite alarming news for LGBTQ people. The creation of this division appears to open the door for medical providers to, for example, refuse to provide gender confirmation treatment for trans people, or refuse to treat children with same-sex parents.

One attendee at the ceremony announcing this new division was Sara Hellwege, a nurse-midwife who sued in 2014 after being denied a job at a Florida health center. The reason she didn’t get the job? She admitted that she would refuse to prescribe birth control pills because of her religious beliefs—and prescribing birth control pills was part of the job she applied for.

She had no business seeking the position in the first place.

David Gorski, a surgeon and editor of the website Science-Based Medicine, expressed the views of many medical providers, myself included, when he tweeted that “physicians who refuse to treat certain patients based on their religious beliefs are in the wrong profession and should never have become doctors in the first place.”

. .   .If you don’t think same-sex couples should be raising children, you won’t be interacting with families in my practice at all. If you’re not willing to discuss PrEP with your gay male patients, and think HIV prevention funding would be better spent on conversion therapy, you won’t be seeing any patients here. If you’re going to ignore the needs of our trans patients or insist on mis-gendering them, we have no opening here for you. And I don’t care at all if you justify any of that with your religion.


Check out the entire column here.
Posted by BlackTsunami at 4:55 PM 1 comment:

Editor's note - What was first a small occasional drip . . . drip and moved to a slow but steady trickle is now a raging flood. Conservative evangelicals, particularly their leadership, are now facing a tremendous backlash for their dogged support of Trump and minimizing of his bad behavior (which includes racism and cheating on his wife with a porn star). It would do the LGBTQ community some good to pay attention to this firestorm and "collect receipts" for the future.  This much deserved backlash probably won't make a dent in the "true believers" crowd who support conservative evangelicals, but you would be surprised how a little sunlight makes the truth more powerful. The truth, in this case being how these folks love to demonize the LGBTQ community, but those attacks like their support of Trump, is rooted in hypocrisy, fear tactics, and un-Christian desires for power. And barring a public "come to Jesus" moment in which they admit their hypocrisy (which probably won't happen), expect them to double-down and even triple-down on their support of Trump. These conservative evangelical leaders are incapable of admitting that they are wrong.

Don Lemon perfectly nails Franklin Graham’s ‘ends justify the means’ moral hypocrisy on Trump - See above video. It means a lot to me to see an openly gay man drag Franklin Graham for his hypocrisy.

Former RNC Chair Michael Steele: Trump’s Evangelical Backers Need To ‘Shut The Hell Up’ - Never thought I would agree with Michael Steele, but here we are.

The religious activists on the rise inside Trump's health department - The fruits of their rotten labor Part 1.

‘Religious freedom’ for adoption discrimination on Georgia Republican’s to-do list - The fruits of some of their rotten labor Part 2.

And the editorial pages have been brutal:

Trump's a true-believing Christian? Tell me, how does that work?

Michael Gerson: The Trump evangelicals have lost their gag reflex

Hypocritical conservative evangelicals shelter themselves from Stormygate
Posted by BlackTsunami at 9:26 AM No comments: