Former NOM head Maggie Gallagher (and now it seems a member of a new group, American Principles Project's Culture War Victory Fund) is out with a video on supposedly how to "handle the same-sex debate at Thanksgiving."

It should be called How Maggie Gallagher continues to lie about the motivations of those on her side.

Watch the entire video if you have the stomach for it. But for my money, the most telling part comes at .44

"Most of us who believe that marriage is the union between a husband and a wife have no interest in shaming those who disagree with us. We understand that most people can disagree on extremely important moral issues."

Then she proceeds to claim that the gay community is unfairly labeling folks on her side of the argument as bigots. It's the same one-note argument she has continued to push:

"If you don't think two men in a union isn't a marriage, you are a bigot, like people who wanted to hold back African-Americans . . ."

But again, Maggie, you continue to demonstrate why you were a piss poor spokesperson for NOM.

In other words, your claims of victimhood don't mean a thing when there is such a huge paper trail of hateful comments, mailings, and flyers which NOM distributed about not just same-sex couples, but the gay community in general.

Such as the following flyers: 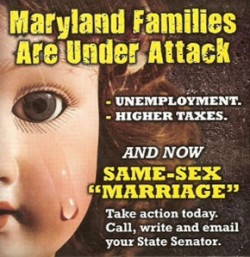 And let's not forget the slanderous comments and posts made about the gay community by NOM - all taking place when Gallagher was chairperson:


NOM Newsletter: Gays Are Engaged In “Jihad,” Want To “Take Away Your Rights”

One of the most annoying things about Gallagher is the absolute nerve of how she tries to make folks believe that NOM is only interested in reasonable discussions about marriage equality when the organization has been guilty of labeling the gay community as sick, diseased perverts out to harm children and cause general mayhem. And a lot of this labeling took place when she was chairperson of the group. I'm hard pressed to believe that she didn't know about this.

So Maggie, spare me talks about reasonable discussion. And please stop saying that folk like yourself aren't interested in shame those of us who support marriage equality.

And most of all, please stop whining that folks on your side of the spectrum are unfairly being labeled as bigots.

Basically your words mean nothing because we have the paper trail to refute you.

Posted by BlackTsunami at 1:04 PM 3 comments:

A Message from a Moderator at Ruthblog - More about the Ruth Institute debacle I blogged about this morning.

Should Truth Wins Out Sue PFOX and Greg Quinlan for Defamation? - The lie is UGLY and Besen should press Quinlan on it.

Social Workers See Gay Parents As Important In Adoptions - Well we KNEW this.

Mayor Warns that Tap Water is Turning His Town Gay - Speechless. I still say if this were true, then the mayor is a dummy. MARKET the tap water!

Fire Kills 15 Transgender Indians in Delhi - We need to pray for all those caught in this tragedy.

From Equality Matters comes a shocker - blogger too obnoxious for even the National Organization for Marriage:

Over the past two weeks, Equality Matters has told you about a number of outrageous comments made by Ari Mendelson, a blogger for the National Organization for Marriage’s (NOM) Ruth Institute.


On November 14, Mendelson ranted against LGBT-inclusive curricula in California public schools, writing that the “ENTIRE STATE has had its public schools ruined” by “LGBT propaganda.”
On November 17, Mendelson  promoted a column calling gay activists “more loathsome” than “jihadi terrorists” and warning that gay activists “should not be able to go out in the streets for fear of being spat upon by decent people.”
Today, the Ruth Institute announced that it would “no longer allow Ari to have posting privileges” on its blog, adding:

His sarcasm has gone over the line and we don’t care to be associated with it...  We will stick to reporting on all aspects of the marriage issue in a civil way.

The Ruth Institute taken away Mendelson's posting privileges and has eliminated several of his past posts, totally disassociating themselves from him.

I'm of the personal opinion that whatever reason Mendelson was dismissed, it had nothing to do with civility or any idea that the folks behind the Ruth Institute has developed a conscience. I'm sure that a personal argument fueled this.

And if you do think that a new found idea of civility is behind this controversy, Equality Matters wants you to think again:

Unfortunately for NOM, however, Mendelson’s hate-filled blog posts are just the tip of the iceberg.

Here’s just a sampling of less-than-"civil" anti-gay rhetoric being promoted at NOM’s Ruth Institute on a daily basis, none of it written by Mendelson:

Posted by BlackTsunami at 4:52 AM 2 comments: