Congressman: if gays were more 'quiet,' they wouldn't have to worry about getting fired 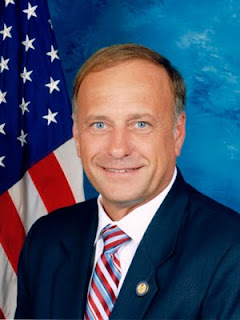 Apparently when Congressman Steve King (Iowa) isn't telling blatant lies about President Obama's appointees, he is giving lgbts bad advice on how not to be discriminated against.

On the radio program of Family Research Council's head Tony Perkins (no slouch in lying about lgbt employment protections himself), King said if gays weren't so open about their sexual orientation, they wouldn't be discriminated against:

Perkins expressed fear that “someone could come in dressed one day as a woman or a man, the next day they come in dressed as the opposite sex” and an employer would be “helpless to do anything about it.”

King agreed, saying the legislation opens the door to Christian businesses getting entrapped by the “homosexual activist lobby.”

“I can imagine someone coming in and interviewing one day in man’s clothes and come back the next day and apply for a job in woman’s clothes, and then setting up a lawsuit in a sting operation to harass our religious organizations,” he said.

King then told a story about his days in the Iowa Senate, when gay activists came to lobby a fellow Republican lawmaker, state Sen. Jerry Behn of Boone, for protected status for sexual orientation and gender identity.

He said, “Let me ask you a question. Am I heterosexual or homosexual?” And they looked him up and down — and actually they should have known — but they said “We don’t know.” And he said “Exactly my point. If you don’t project it, if you don’t advertise it, how would anyone know to discriminate against you?” And that’s at the basis of this.

If people wear their sexuality on their sleeve, then they want to bring litigation against someone that they would point their finger at and say “you discriminate,” it is an entrapment that is legalized by the ENDA Act, it appears to, and its a violation of the individual rights of employers to, at their own discretion, decide who they want to hire and who they want to fire. We don’t need more federal mandates. And we surely don’t need a political statement, and that’s what this is, too. This is the homosexual activist lobby taking it out on the rest of society. They are demanding affirmation for their lifestyle. That’s at the bottom of this.

No that is not at the bottom of the desire to pass ENDA (the Employment Non-Discrimination Act). King is operating on a myth that our lives have more to do with "behavior," i.e. sex acts than anything else.

What he, Perkins, and some others want to forget (and subsequently wants everyone else to forget) is that our lgbt identities encompass more than sex acts. We have lives, relationships, and families; none of which we should have to hide to suit the mindsets of ignorant folks who think that homosexuality is encompassed by a mere sex act that one takes care of in a secluded place between going to the grocery store and picking up the laundry.

You see that's what it's about - the ability to be open about our lives and our families without fear,  just like everybody else.

What King is saying is that lgbts should place ourselves in a psychological closet so as not to interfere with the worldview that he and others have about such things as family.

Sorry my friend, but it's not going to happen. Closets are for clothes, not for people.

Posted by BlackTsunami at 2:58 PM 4 comments: Links to this post

Rekers resigns from 'gays need to be cured' group

The site Talking Points Memo is now reporting that George Rekers has resigned as a board member of NARTH:


George Rekers resigned this morning from the board of NARTH, the National Association for Research and Therapy of Homosexuality, amid a gay escort scandal.

NARTH is a group that promotes the idea that homosexuality can, and should, be cured.

Pruden also denied a report in the Miami New Times that NARTH had been involved in helping Rekers respond to the media.

"NARTH has never had any role in advising Dr. Rekers except to suggest that if he is innocent he needs to get a good lawyer," Pruden said in an email. "He has friends who are members of NARTH and they are free to talk with, advise, and needless to say, they are free to help him in any way they might select."

"NARTH as an organization has taken no official role in this other than asking him to explain to us what has happened and in accepting his resignation," he said.

Rekers, who is also a co-founder of the Family Research Council and a member of groups that seek to protect children from homosexuality, was recently caught with a young male escort.

Rekers has also testified for the states of Arkansas and Florida in defense of their bans against gay couples adopting children. Florida paid Rekers $120,000 for his testimony, which the judge said was not credible.

Latest on Rekers scandal: Media allegedly listened in on phone conversation between him and escort

The George Rekers escort scandal goes on and on

Posted by BlackTsunami at 9:53 AM No comments: Links to this post

Bill McCollum's Facebook page - This isn't an article. It's an observation. The link is to Florida Attorney General Bill McCollum's facebook page supporting his run for governor. McCollum is the man responsible for phony expert and male escort hirer George Rekers receiving $120,000 to defend Florida's ban on gay adoption. In light of last week's scandal, folks are expressing their unhappiness over McCollum's connection to Rekers. It's amazing to see, that is if the comments haven't been scrubbed off yet.

Porter Fights Back, Disputes Allegations of Dominionism - Janet Porter is like a gift of madness that keeps on giving.

Posted by BlackTsunami at 9:28 AM No comments: Links to this post

Will the Ugandan 'Kill the Gays' bill be killed?

A special committee organized by the president of Uganda has recommended that a harsh antihomosexuality bill that has drawn the ire of Western governments be withdrawn from Parliament, a senior government official said Saturday.


Adolf Mwesige, a lawmaker and chairman of the special committee, said that virtually all clauses in the legislation were either unconstitutional or redundant, and that any other clauses should be placed in another bill dealing generally with sexual offenses.

“Ninety-nine percent of all the proposals in the Bahati bill have been done before,” Mr. Mwesige said. “If we proceeded, it would definitely provoke criticism, and rightly so.”

The antihomosexuality bill, also known as the Bahati bill after David Bahati, the lawmaker who proposed it last year, has been widely criticized by human rights groups and foreign governments. It calls for homosexuals to be executed in some cases. It also says that homosexuals should be extradited and that people in Uganda must report anybody known to have committed a homosexual act within 24 hours. The bill found backing from a number of Uganda’s influential evangelical pastors, some of whom have been supported and partially financed by American churches.

Uganda’s president, Yoweri Museveni, has publicly shown concern about the legislation and formed the review committee in February in response to international scrutiny. Though the panel’s ruling is not the final word, analysts saw it as a strong sign that the bill would eventually be dropped.

Wouldn't that be nice if this turned out to be the case? Although I think one of its supporters, Martin Ssempa, would be furious.

'I would kill a gay son'

Martin Ssempa claims to be misunderstood

Martin Ssempa celebrates his homophobia via a blog

Posted by BlackTsunami at 4:41 AM No comments: Links to this post