Know Your LGBT History - Set It Off

Set It Off (1996) is the only case in which the presence of a seemingly stereotypical gay character actually saves the movie.

Set It Off is a "hood movie" in which four black women decide to rob banks because the "system" has done them dirty.

And therein lies the problem. The movie bends over backwards so much in order to showcase how three of them are wronged that the scenes and the characters become ludicrous.

First, there is Frankie (Viveca Foxx) who loses her job at a bank because she forgets the correct procedure of how to handle a robbery. This is probably because the robber blasted a woman right in front of her.

The scene where she is fired is also one where she is grilled by a merciless and uncaring police officer (John McGinley) simply because she knew one of the robbers from her neighborhood.

Did I mention that during this same scene, her clothes are still marked with blood and brain matter from the shooting victim?

Then there is Stonie (Jada Pinkett) who prostitutes herself to a hateful man so that she can get some money for her brother's college tuition, only to find out that her brother is not going to college. And to make matters worse, her brother is later brutally slaughtered by the police in case of mistaken identity.

There is Tisean (Kimberely Elise), a whimpering, simpering single mother who loses her child to a heartless social worker (Anna Maria Horsford) because the child accidentally ingested some chemicals at her job where she takes him because she cannot afford daycare.

And then there is Cleo (Queen Latifah), a stereotypical "butch" lesbian who, luckily for us has no backstory of victimhood. All she wants is to get high, take care of her car, and her girlfriend (big props to the movie for not only devoting time to Cleo's relationship with her girlfriend  but also showing it in a positive light).

Maybe the writer felt that Cleo didn't deserve a backstory. Whatever the case may be, it was up to Queen Latifah to fill in the gaps on Cleo and she does so in an excellent performance that, if the movie was better, would have probably garnered her an Oscar nomination.

Cleo is the spark that the movie needs. It is she who comes up with the idea of robbing banks, it is she who provides the guns, and it is she who saves the group from capture in a wild scene.

That's not to say that she is not without her faults, but that's what makes the performance good. In Cleo, Queen Latifah creates a three-dimensional devil-may-care characterization which is solely missing in movies these days:

This being a "hood movie" means unfortunately that the characters are headed for a sad end. Only one of them survives (Stonie) to escape.

However when Cleo is killed, it is spectacular and sad at the same time. I remember being told by friends who saw the movie at the theatre that the following scene had many women in the audience crying:

Read more »
Posted by BlackTsunami at 3:01 PM No comments:

Gays Are Us: Why LGBT Equality Is Not a “White” Issue - Preach the gospel, my brother!

Sexual Orientation Added to Clayton Schools' Non-Discrimination Policies - And the move got a standing ovation, too. 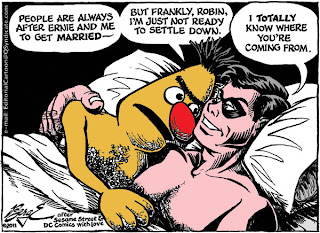 Go ahead and laugh. You KNOW you want to.

A few weeks ago, members of the religious right was attempting to connect a polygamy court case to the gay community and marriage equality. Now it's pedophilia. Next month, it will probably be bestiality

While the gay community have been busy with other matters, members of the religious right are perpetrating a slow but consistent march to a claim that acceptance of homosexuality will soon lead to the acceptance of pedophilia.

The key here is that these folks are not saying that pedophilia and homosexuality are connected, but rather are using a faulty "slippery slope" argument, i.e. - "just like the gay community is receiving more acceptance, pretty soon the pedophiles will be getting more acceptance."

It began when the Liberty Counsel's Matt Barber and a researcher by the name of Judith Reisman attended a recent symposium of a group - B4U-Act - who is seeking to  reduce "stigmatization and stereotyping of people who are attracted to children."

Barber is no stranger to the gay community for his offensive anti-gay comments, but Reisman is not that widely known.

All you need to know about her is that she is a former songwriter for the show "Captain Kangaroo" who suddenly became a researcher (she does have a doctorate, but it's in communications). According to writer Terry Krepel, she was given a federal grant of more than $784,000 to study 30 years worth of Playboy magazines. Her findings were dismissed as "paranoid pseudoscientific hyperbole."

Reisman later wrote a silly book accusing sex researcher Alfred Kinsey of child abuse. When the Kinsey Institute easily batted down her charges, she sued it for defamation and emotional distress, claiming that it tried to censor her book. Not only was the case dismissed, but it was dismissed with prejudice, which means Reisman could not re-file it.

One shouldn't worry too much about Reisman, however, because she has made a name for herself in right-wing circles not only through her anti-Kinsey nonsense but also by claiming that gays are recruiting children:

At a May, 1994 conference of Christian right leadership in Colorado Springs described by the Washington Times as "top secret," Reisman introduced her theory of a proselytizing homosexual movement. "I would suggest to you," she told the conference, "that while the homosexual population may right now be one to two percent, hold your breath, people, because the recruitment is loud; it is clear; it is everywhere. You'll be seeing, I would say, 20 percent or more, probably 30 percent, or even more than that, of the young population will be moving into homosexual activity."

Anyway, Reisman and Barber attended this ridiculous symposium of this virtually unknown group and reported on what was said there. Their report was pretty much ignored by folks with common sense.

Naturally this means that the religious right, including the National Organization for Marriage, and other right-wing sources welcomed the report with open arms and publicized it as legitimate.

And now, according to Equality Matters, this now includes Fox News. Apparently publicizing Barber and Reisman's sojourn is the latest in the "slippery slope" angle Fox is trying to push to connect the gay community to pedophilia:

On August 11, the website posted a column by Fox News contributor and anti-gay pseudoscientist Dr. Keith Ablow, in which he compared homosexuality to pedophilia and asserted that both gays and pedophiles could alter their sexual orientations as a result of environmental factors.
On August 25, FoxNews.com posted yet another Ablow column  -- "Paving the Way for Condoning Child Rape” -- in which the “Fox News Medical A-Team” member lamented a recent symposium put together by B4U-Act, a group that seeks to reduce the stigmatization and stereotyping of people who are attracted to children:

But, now, there should be no doubt that our culture is poised to begin embracing pedophilia as a lifestyle choice, just like homosexuality. A group of psychiatrists and other mental health professionals called B4U-Act, which has representatives from Harvard and Johns Hopkins, gathered recently in Baltimore to organize their push to change the negative perception of pedophiles and encourage them to get help in a nonjudgmental environment.

While B4U-Act is not representative of mainstream psychiatry, and while the American Psychiatric Association (APA) did not participate in the group’s meeting, psychiatry has a history of caving into cultural pressure to stop defining controversial illnesses as pathological. You won’t even find ego-dystonic homosexuality—meaning, homosexual impulses that cause an individual to feel distressed and which that individual does not want to give into—in the DSM, anymore. [emphasis added]

Take note of the highlighted parts of Ablow's column - B4U-Act is not in the mainstream of psychiatry nor did the American Psychiatric Association participate in the group's symposium. Those are facts.

Ablow's sad speculation about the field of psychiatry is merely a poor job of trying to deflect from those facts.

Equality Matters goes on to say that  FoxNews.com also published an article - on the front page - about the B4U-Act symposium and made a dubious claim:

Critics of the effort also note that the movement likens its fight for pedophilia acceptance to society's more recent embrace of homosexuality. They warn of a slippery slope to a time when pedophilia is "just another lifestyle choice" that won't warrant criminal charges—and will leave young children at risk.

Equality Matters said that the article did not identify the "critics."

Followers of Fox News - most specifically the televised shows - know that when hosts, such as Megyn Kelly or Gretchen Carlson, say things like critics say or some folks claim, it's usually an introduction for them to sneak in a talking point.

And now  Peter LaBarbera and his hate group, Americans for Truth, is involved. He will be featuring an interview with Barber on the symposium. My guess is that we will be hearing less about the unknown group and more about the so-called "evils of homosexuality."

So it appears that there is an abandoning claiming that gays are pedophiles in lieu of the false claim that "if America accepts homosexuality, pretty soon it will accept pedophilia."

It's a ridiculous claim. A few weeks ago, members of the religious right was attempting to connect a polygamy court case to the gay community and marriage equality. Now it's pedophilia.

Next month, it will probably be bestiality.

It's always amazing to me how people whose goals are always destructive can think of so many avenues to  pursue them.

The right's attempt to connect an unknown group's desire to push pedophilia to the very real legitimacy of same-sex relationships and families says less about homosexuality and more about their desperation to smear the gay community.

It's hilarious on one point because it's doomed to fail. However, it's sad on two other points.

The first point is how the gay community yet again has to endure the pedophile smear. The second point is personal. It just pains me to realize that folks like Barber and Reisman are making gobs of money by appealing to the ignorance of the mysterious, but much-moneyed folks who fund their mess.

Oh well. That adage of  "God generally shows what he thinks about money but whom he gives lots of it to" definitely applies here.