I'm still in a pleasant state of shock over this interview because of the potential fireworks. The American Family Association's Bryan Fischer is interviewing discredited researcher Paul Cameron over his newest bogus study.

Now if you have kept up with this blog, you know my deal with Paul Cameron. Paul Cameron is a discredited researcher who has been either censured or dismissed from several medical associations (including the American Sociological Association and the American Psychological Association) for his bad research methodologies and outrageously homophobic claims, including the claim that gays stuff gerbils up their rectums.

He was also, for a long time, the go-to man for phony statistics about the lgbt community. Groups such as the Family Research Council, the Traditional Values Coalition, Concerned Women for America, and even Fischer's organization, the American Family Association, once used Cameron's studies in talking points, in front of Congress, and other venues in order to stop the passage of pro-lgbt equality laws.

And they did this even though many of them knew that he was discredited. However, when his history of junk science began to come out, these groups quietly dissociated themselves from him, even though they still cited his work (sometimes through a third party) or cherry-picked legitimate studies to prove his theories (such as the lie that gay men molest children at a high level or the false accusation that gay men have a shorter lifespan than heterosexuals).

That, until now.  Leave it to Bryan Fischer to give the lgbt community what we need in terms of proof as to the true face of religious right lies. This "new" study Cameron is touting to Fischer is yet another update of his infamous 1980s "gays have a short lifespan" study. And of course it's flawed, just his other work.

As a matter of fact, allow me to give you a good impression of Cameron's poor research. You remember what I said about his claim regarding gays and gerbils? He didn't attain this claim from a study. He got it from a newspaper column which was refuting the claim regarding gays having sex with gerbils.

But Fischer not only interviews Cameron, but actually defends him from 0:00 to 2:55 of the following clip:

Fischer claims that he defends Cameron's discredited work because people like him - i.e. the religious right - "love" gays.

Please. If I wanted "love" like that, I would double-date Chris Brown and Ike Turner.

Fischer's interview of Cameron is significant because Fischer's group (the AFA) and Cameron's group (the Family Research Institute) are both listed by the Southern Poverty Law Center along with a crop of other religious right organizations as hate groups because of the homophobic propaganda they spread about the lgbt community.

Fischer, just like Family Research Council president Tony Perkins (FRC is another SPLC-designated hate group), claims that SPLC is targeting his group because of a so-called anti-Christian bias.

But it's like what I said yesterday about Tony Perkins and the FRC. What Christian group do you know gives credibility to a discredited researcher who, amongst other things,  falsely claims that gays stuff gerbils up their rectums?

Groups like AFA and FRC and their spokespeople like Fischer and Perkins whine about an anti-Christian bias because they want to obscure their dealing in lies. They want to take attention away from the hypocrisy of claiming to stand for morality and values while freely peddling distortions - a hypocrisy which they seem to have perfected.

But you can't hide your hypocrisy if you drag it out on centerstage.

However, luckily for the lgbt community IF they are smart enough to take advantage, Fischer seems to think that you can.

Posted by BlackTsunami at 3:14 PM 2 comments:

What Actually Happened To That Same-Sex Couple In The Missouri Hospital - Think Progress has broken down this awful story by pulling from several sources. This madness comes down to a viciously homophobic relative and a nurse who looks like she should have known better.

Federal Officials Aim For “Speedy” Response Following Missouri Hospital Arrest - And now federal officials are investigating to see if laws were broken, and NOT on the part of the gay couple.

French Senate Passes Gay Marriage Bill - VIVA, LA FRANCE! Oh hush up! I know that I am probably saying that wrong. Seriously though, does this mean we are going to have to go through the entire "freedom fries" thing again?

It Is Not News That FRC is Urging a Donor Boycott of the RNC - I support this boycott. LOL!
Posted by BlackTsunami at 9:00 AM 1 comment:

When Peter LaBarbera carries an anti-gay obsession too far . . .

Some people have accused Peter LaBarbera of Americans for Truth of having an obsession with demonizing gays. Some folks have pointed out that this obsession is so bad that LaBarbera will sometimes stoop to incredible depths in order to demonize the entire lgbt community based upon the actions of an alleged few.

I think the following picture points out that these claims may have a ring of truth. While millions of us, both gay and straight, went to church on Easter Sunday in order to celebrate Christ's resurrection, LaBarbera was in San Francisco taking this picture: 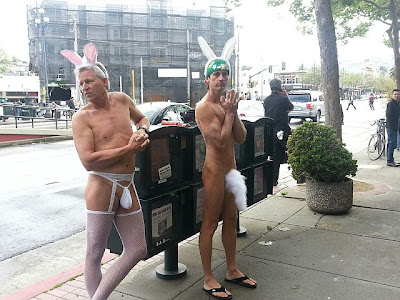 I shot these photos on Easter Sunday, March 31, 2013, near the corner of Market and Noe streets. (I ventured to the “gay” Mecca to cover the homosexual drag queen group Sisters of Perpetual Indulgence’s uber-blasphemous “Hunky Jesus” contest, which was cancelled and later rescheduled due to rain.) San Francisco’s prohibition of public nudity – which exempts baudy street festivals like the city’s annual “Folsom Street Fair” – went into effect Feb. 1 and is being challenged in court by nudists.


I'm not even going to defend or criticize these men because I was not there. I also was in church on Easter Sunday.

All I'm going to say is:

Come on, Peter! On Easter Sunday?A lot of us just simply went to church and maybe you should have, too.

Posted by BlackTsunami at 4:59 AM 3 comments: