My talk today at Netroots Nation went over pretty well.

I was supposed to be talking about how I track religious right distortions, as it was phrased "opposition research."

However, I made a point to say several times that it's not necessarily "opposition research" but "truth telling."

It's really nothing more than what journalists and pundits should be doing when writing about or interviewing folks like Tony Perkins and Maggie Gallagher, i.e. digging deep and questioning their responses rather than allowing them to go on a monologue of talking points.

Even though I would have really loved to have gone into detail about the six deceptions of the religious right, it was still a step forward to be able to finally throw out the idea that gay activists should educate themselves more on the religious right.

The entire day in general went quick and very well. I was especially pleased to give some positive shout outs to my lgbtq brothers and sisters in South Carolina during the second panel discussion I took part in, i.e. turning purple and red states into blue states on the subject of lgbtq equality.

Between you and me though, the red state/blue state dichotomy is dumb as hell and for the life of me, I don't know who ever thought it up.

The general gist of panelists there is that the national gay rights organizations are too quick to write off states like Florida, Indiana and my state of South Carolina because they figure we are lost causes.

But meanwhile, the gay communities in these states are thriving and getting things done. I was especially glad to brag on the various gay organizations in South Carolina.

So all in all, I have thus far accomplished the goals I set out this year. Can't wait until tomorrow.

Posted by BlackTsunami at 8:23 PM 3 comments:

This just hit my inbox:

In a surprise move, the state of California’s ethics office just announced that it will investigate Fred Karger’s complaint against the Washington, DC based NOM.  In his sworn complaint of May 17th, Karger alleged that NOM did not report over $340,000 that it raised to pass Proposition 8 four years ago.  California joins the state of Maine which is in its third year of its investigation of NOM, the leading anti-gay marriage organization in the country. 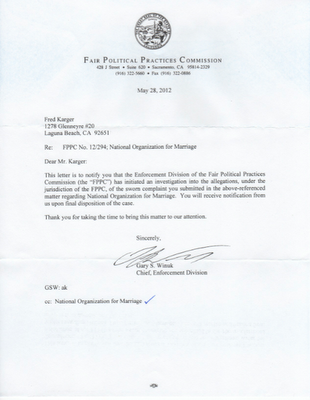 It shows that NOM had received 11 large contributions in 2008 that were never reported as required under California election law.  That was the year NOM helped lead the effort to pass California’s Proposition 8.

Mitt Romney’s $10,000 Contribution Never Reported
One of the 11 missing contributions was $10,000 from presumptive GOP presidential nominee Mitt Romney’s Alabama PAC.  In addition to the Romney money there were 10 more contributions NOM did not report, including: $150,000 from Michael Casey of Jamestown, RI, $100,000 from Sean Fiedler of New York, NY and $25,000 from NOM Board member Craig Cardon of Mesa, AZ, a General Authority in the Church of Jesus Christ of Latter-day Saints (Mormon Church).

NOM Must Obey the Law
“The National Organization for Marriage has spent tens of millions of dollars to take marriage rights away from millions of Americans over the last four years,” said Karger, who is also responsible for the NOM investigation in Maine and the 2010 FPPC successful prosecution of the Mormon Church on 13 counts of election fraud.  “NOM is allowed to participate in these elections, but it must obey all state and federal laws and report where all of its money is coming from.  Once again it looks like they got caught.”


We’ll be Watching
“Now as NOM funds the four anti-gay marriage elections this fall in Minnesota, Washington, Maryland and Maine, I will be watching them closely.  Under the leadership of Maggie Gallagher and Brian Brown, NOM is relentless in its desire to harm people and apparently thinks that it is above the law.  I will continue to monitor their activities in every state where it wages its war against the LGBT community,” added Karger.

And this has been confirmed by The Sacremento Bee

From The Huffington Post comes an absolutely ridiculous story:

A West Virginia-based teen radio host is making waves after proclaiming that President Obama "is making kids gay" in a recent episode.

Fourteen-year-old Caiden Cowger, who hosts the twice-weekly "Caiden Cowger Show," made his anti-gay proclamations in a recent broadcast, video of which was uploaded to his YouTube channel on May 26. "Homosexuality is a belief," Cowger, who has previously interviewed former GOP presidential candidate Herman Cain, declares. "The person is not born that way, no matter what Lady Gaga says...it is a decision."


After confessing that he was once friends with some kids who have since come out as gay, he notes, "They were not homosexuals [then]...they just decided all of a sudden, 'I think I'm going to be gay,'" before he eventually concludes, "I'm going to tell you this, guys:  President Obama...Vice President Biden...is making kids gay!"

Cowger, who is identified by The New Civil Rights Movement as a Pentecostal Christian, slams homosexuality as "a perverted belief, it's immoral and not natural" before noting, "I'm not for bullying homosexuals, I believe that it's wrong. But when you're trying to teach them the word of God and they consider that bullying...I find that a big problem, not being allowed to convert other people to my religion."

Please guys, no rude comments. This is just a 14-year-old child who doesn't know his ass from his elbow. No doubt the right will embrace him as a truth-teller, but in reality he is a mere child talking about things he knows nothing about.

And though some folks may disagree with me giving him attention, I say when the  right shows its ignorance, shine a spotlight on it.

I mean really . . . from coaching three-year-olds to sing anti-gay songs in church to encouraging 14-year-olds to accuse Obama of making children gay.

Come on, guys on the right. Even if you have no sense of decency, where is your sense of self-respect?

Miss Pennsylvania USA Resigns In Protest Of Transgender Candidates - Poor baby. She will get over it.

New Mexico Appeals Court Rejects Claim That Religious Right Can Ignore Anti-Discrimination Laws - The gay community's reaction is mixed over this. What do you think?

Ninth Circuit Denies Request to Rehear Prop 8 Case, So What Happens Now? - I KNOW you all have heard this good news. But what does it mean?

Netroots Nation - First Day : I get to talk about debunking the religious right! 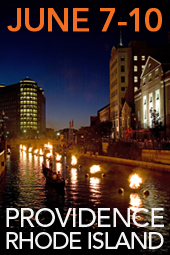 As many of my readers know, I am presently in Providence, RI attending Netroots Nation. Presently, I am at a portion of the conference where lgbtq activists and bloggers are coming together to brainstorm and talk about our experience and goals.

Imagine my surprise when I was asked to give a 10 minute presentation on "opposition research" and another panel discussion on blogging in conservative red states.

I am extremely psyched by both, but specifically the first. I have long wanted to talk about the importance and the need to study the tactics of the religious right.

When I was first asked, I envisioned an image of myself wearing a uniform that George C. Scott wore in Patton while standing in front of a giant rainbow flag. My first line would be:

"Folks, opposition research is hell. God help me, I love it so."

Seriously though, my goal is to press upon folks the importance of knowing those who want to stop our equality. It's not enough to simply call them "bigots." It is imperative that we break down their tactics and expose their lies at every turn.

I really want to impress upon folks two things:

1. It is very important to "know the enemy" and put them on the defensive before something happens. We tend to wait until Maggie Gallagher or Tony Perkins says something before reacting. We need to get them to react now and then.

2. The positive effects of putting positive information out there for our youth to read. On that score, I am going to have to share a painful story from my college days in terms of why information needs to be out there regarding the religious right to not only educate,  but also to inspire our young folks and also to let them know that they are not alone . . . . and to get them motivated.

Wish me luck. I intend to make the most of my time here ;p

Posted by BlackTsunami at 7:29 AM 2 comments:

JC Penney recently incited backlash from the American Family Association’s One Million Moms for featuring a gay couple in one of their Fathers’ Day advertisements when OMM suggested that the department store was “promoting sin” with their inclusive advertising.

Gay couple Cooper Smith and Todd Koch responded today to the negative and positive attention their ad has received, saying that the positive support has been overwhelming and the criticism doesn’t bother them because “we’re not ashamed of our family.” Smith pointed out that the ad shouldn’t be controversial because it just reflects the day-to-day life of his family

Posted by BlackTsunami at 5:35 AM 2 comments: