After 40 years together, Clark County men will be first in line for marriage license - A gay couple who has been together for 40 years are finally allowed to legally wed. This is something to fear? How?

Decorated Veterans Among The First in Washington State To Receive Marriage Licenses - Two women who are fighting for our freedom will also be able to legally wed each other. Oh I can just hear the hoof beats of the Four Horsemen of the Apocalypse.

Pepsi Petitioned To Oppose Uganda's 'Kill The Gays' Bill - You had better believe it!

Michigan House Committee Advances ‘License To Discriminate’ Bills For Adoption Agencies - This ain't good. Pay attention because if this awful bill is successful, it will be attempted in other states.
Posted by BlackTsunami at 2:59 PM No comments:

NOM urged to get extremely homophobic and nasty

From Right-Wing Watch comes this interesting blurb which shows that the National Organization for Marriage is still catching grief from the right over it's election day losses:

After four defeats on the issue of marriage equality at the ballot box and a failed attempt to remove an Iowa justice who favors same-sex marriage, right-wing activists are starting to panic and offering their advice to the GOP and groups like the National Organization for Marriage and Focus on the Family: you’re not anti-gay enough. Yesterday, Matthew Cullinan Hoffman of LifeSiteNews similarly argued that organizations that oppose same-sex marriage need to get nastier.

According to Hoffman, who is also a correspondent for the National Catholic Register, “the very fact that” gay marriage is even up for debate “is an indication of a level of moral confusion and decadence that borders on the apocalyptic.”

He went on to maintain that same-sex unions are a “narcissistic parody” of opposite-sex relationships as “homosexual relationships do not represent an authentic intimacy, but rather involve mutual exploitation for the sake of satisfying an unnatural lust” and lead to suicide, alcohol and drug abuse, violence along with other “destructive consequences.” “Homosexuals themselves, who are the greatest victims of the ‘gay lifestyle,’ and are in desperate need of the truth,” he writes.

“Until and unless pro-family activists adopt a comprehensive and coherent answer to the ideology of the culture of death,” Hoffman concludes, “we will continue to suffer defeat after defeat, until the institution of marriage is completely destroyed.”


It sounds like to me that Hoffman wants NOM to go from this: 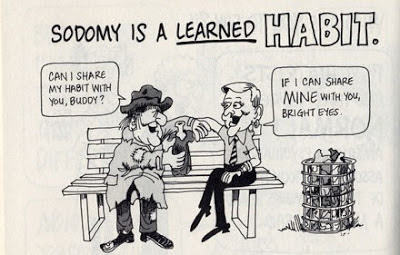