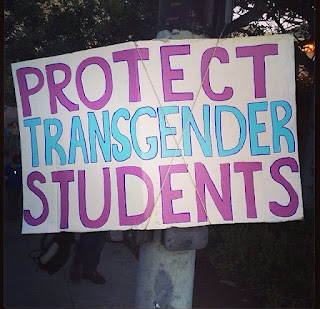 I envision the DeSantis Administration getting angry that this incident was exposed as false before they could exploit it as yet another reason to undermine the state's LGBTQ community. Knowing them however, it wouldn't be a surprise if they used it anyway.

From Florida Today via Yahoo News:

After a nearly three-week long investigation, Melbourne Police said in a report finalized on Friday that allegations of a transgender student assaulting a girl in the bathroom at Johnson Middle School were unfounded. Over the course of the investigation, police spoke to administrators at Johnson Middle School, the Brevard County Sheriff's Office, and the Department of Children and Families, all of whom said no reports regarding a sexual assaults at the school had been made. Rep. Randy Fine, R-Palm Bay, and the parents that police spoke with were unable to give specific information, saying that they had heard the story of the alleged assault from multiple sources, including other parents and an unnamed teacher who did not work at Johnson Middle School.
Brevard Public Schools vehemently denied that any incident occurred at the middle school after Fine publicly called for Florida Education Commissioner Manny Diaz to investigate a potential sexual assault at Johnson Middle School on Aug. 11. Fine did not have firsthand knowledge of any assault, but said parents had reached out to his office. He blamed BPS' practice of allowing transgender students to use bathrooms of the gender that they identify with for making such an incident possible.
. . . Police traced the story of the Johnson Middle School assault to a conversation between retired BPS teacher Karen Parrish and a teacher who did not work at Johnson, then closed the case as unfounded when Parrish did not provide the name of the current teacher and no witnesses came forward.

If the story had turned out to be true, we would be hearing about it all over social media and in the cable news media. But since it turns out to not be true, the vultures who exploit stuff like this are slinking away, hoping that it will be forgotten.