The response to these posts have been, in my view, successful. Many people who weren't aware of Paul Cameron became educated on his lies about the gay community.

But then there was a segment who asked why was I giving Cameron attention. They claimed that any focus on Cameron validated him. They were under the impression that if Cameron was ignored, he would go away.

Unfortunately, this mindset also includes other lies told about the gay community by religious right groups.

But what some in our community fail to understand is that these lies aren't going away and ignoring them won't make them disappear. They will continue to  be repeated and will continue to have the power to hurt the gay community. A perfect example is a recent incident during a Minnesota legislative hearing on marriage equality: 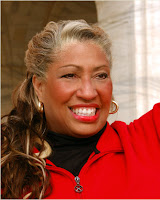 Barb Davis White, a Tea Party activist and Republican candidate for Minnesota’s 5th Congressional District, prompted shocked gasps from the packed hearing room when she said, “Rosa Parks did not move to the front of the bus to support sodomy.” Her testimony involved accusations that the movement for marriage equality is hijacking the civil rights movement.

“There is no difference between a black person and a white person other than their skin color when there’s a tremendous difference between a man and a woman,” said White, who was the GOP’s endorsed candidate against Rep. Keith Ellison in 2008. “Allowing a black woman and a white man to marry does not change the definition of marriage. However, allowing two men or two women to marry would fundamentally change that definition.”

White also garnered some laughs from the audience when she said, “Studies also show that the average homosexual has hundreds of sexual partners in his lifetime… and I repeat hundreds.”
“I’m here today to tell you that homosexuality and lesbian behavior is unhealthy,” claiming that gays and lesbians have higher rates of STDs than anyone else in the world, including “gay bowel disease,” an ailment that does not exist and is often used by religious right figures to paint gay men as diseased.

We as a community cannot cast aside the lies told about us anymore than we should ignore those who speak them. There are some things you can't sweep under the rug. They always have a way of coming back against you.

I think it's time we trot these lies out in the public as examples of  how deceptive religious right groups are. A lie is made powerless not by ignoring it but showering it with the truth.

Whether we realize it or not, all of the phony scare stories, the reliance on junk science, the truncating of public controversies can serve to backfire on religious right groups if  we used them to pose the following question: If these groups are moral and Christian, then why do they feel the need to lie on the gay community?