James Dobson Continues To Support Trump Because His Comments ‘Don’t Threaten The Future Of This Nation’ - There was a time when this man was praised as a kingmaker of American politics. One of the MVPs of Bush's 2004 election is now our puppet as he continues to support Trump, thereby demonstrating to the world how the anti-lgbt industry never had any integrity. That is if, instead of yawning about it, we "exploit" (yes I said it) this moment.  We can be petty.


Republican Texas Judge Officiates Gay Wedding, Comes Out As A Democrat - Awwww, this is cute!

Massachusetts faces grueling, two-year fight over where trans people can pee - Unfortunately, "it's on" in Massachusetts.

Belarus Leads Group of Nations Blocking LGBT Rights in UN Plan - This is NOT good, y'all.

Why it matters: Outcome of presidential race has implications for LGBT rights - Pay attention, write it down, memorize it!
Posted by BlackTsunami at 9:15 AM 1 comment: 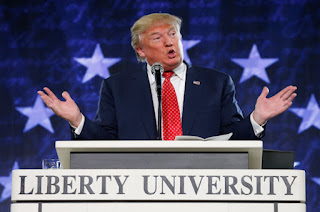 To call this election a hot mess would be a massive understatement. I won't go into detail about the very recent allegations by four women (and I think the number is growing) that Trump sexually harassed them. But I will talk about an interesting development regarding students at the conservative Liberty University:

Students at Liberty University have issued a statement against Republican presidential candidate Donald Trump as young conservatives at colleges across the state reconsider support for his campaign.A statement issued late Wednesday by the group Liberty United Against Trump strongly rebuked the candidate as well as the school’s president, Jerry Falwell Jr., for defending Trump after he made extremely lewd comments about women in a 2005 video. The students wrote that Falwell’s support for Trump had cast a stain on the school’s reputation.

“We are Liberty students who are disappointed with President Falwell’s endorsement and are tired of being associated with one of the worst presidential candidates in American history,” the statement said. “Donald Trump does not represent our values and we want nothing to do with him. … He has made his name by maligning others and bragging about his sins. Not only is Donald Trump a bad candidate for president, he is actively promoting the very things that we as Christians ought to oppose.”


Ironically, this statement came out just as Liberty University President Jerry Falwell, Jr. said he stands by Trump in spite of the growing allegations of sexual harassment.

The controversy at Liberty University is a microcosm of the conundrum facing the religious right when it comes to Trump. For years, they have painted lgbts as sexual predators. Recently, they've falsely pinpointed the transgender community with awful "bathroom bills," claiming that they are a risk to children. What are they going to do if it turns out that someone they are supporting turns out to be an actual sexual predator?
Posted by BlackTsunami at 5:05 AM No comments: