Hey NOM! What about Kim Kardashian?

No doubt everyone has heard of Kim Kardashian's divorce announcement.

Right after one asks just who is Kim Kardashian, one should ask what the National Organization for Marriage say about it or will it say anything at all. From NOM Exposed:

The National Organization for Marriage should be putting out a statement today, right? After a $10 million wedding, TV personality Kim Kardashian and New Jersey Net Kris Humphries are ending their two-month marriage. The starlet apparently cites ‘irreconcilable differences.’ Wow. She dated this guy for a while and it took two months of marriage to figure that out? That’s the ‘sanctity of marriage’ for you!”

My guess is that NOM will be conveniently silent on the Kardashian affair, choosing to devote time to continuing to needle NY Senators for their part in passing marriage equality in the state, like so: 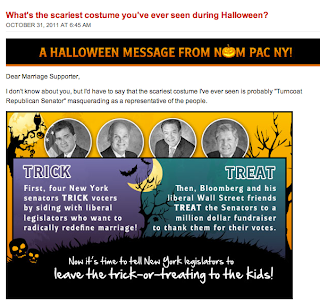 Posted by BlackTsunami at 3:19 PM No comments:

Rick Perry Endorses New Hampshire’s Marriage Repeal Effort During Awkward Speech To Anti-Gay Group - I don't think folks really care about the speech, but rather than did Perry "indulge" before making the speech.

Charges Dropped Against Pastor Linked To Miller Kidnapping - Keep your eyes on this one my friends. Someone is about to sing like a canary and I don't think that the religious right will like his tune.

Belforti and willing allies continue to feign ignorance towards obvious - If you can't do your elected job, then you need to resign. Period. You are NOT a victim no matter how NOM tries to make you one.

Ex-Gay Therapist Offers Duplicitous ‘Apology’ To Attract New Gay Clients To Harmful Treatment - Richard Cohen is the only member of the religious right who honestly freaks me out.

Report: Fox News Downplays Stories About Anti-LGBT Bullying, Suicide - And we are surprised? Why?

Catholic Church making deal with the devil to stop marriage equality in Minnesota?

Earlier this month when Minnesota Archbishop John Nienstedt sent out a letter urging every Catholic church in the state to create ad-hoc committees which would work to pass a constitutional amendment against marriage equality, he caused a deserved uproar regarding the idea that a tax-exempt entity would take such an aggressive role in a political issue.

However, there is another issue in this situation which needs more attention:

We all know the exploits of the National Organization for Marriage - how the group moves from state to state scaring up the populace against marriage equality via lies and scare tactics such as claiming that gays are "corrupting" children while fighting state laws demanding that it reveal its donors.

However, let's focus more on the Minnesota Family Council. People should be reminded that group has a sordid history of homophobia. According to People for the American Way's Right Wing Watch:

Tom Prichard, the MFC’s president, maintained that LGBT youth commit suicide because they live an “unhealthy lifestyle” and that anti-bullying programs are ways to have children “indoctrinated in homosexuality.” Prichard also criticized Gay Straight Alliances, saying “it’s sad and harmful for kids to celebrate homosexuality when in fact it’s not a healthy lifestyle;” he went on to claim that Matthew Shepard’s murder wasn’t a hate crime and that his “death served an important ideological purpose for homosexual activists.”

Earlier this year, MFC was called out for having materials on its webpage which accused gays of pedophilia, bestiality, and the consuming of bodily wastes. Prichard later actually defended the inaccurate data.  However after much outcry, the materials were removed from the webpage without any comment.

The Minnesota Family Council is scum. It is a group devoted to demonizing and stigmatizing the gay community through junk science and ugly propaganda.

Yet it is the same group which Archbishop Nienstedt sees no problem in teaming up with in order to stop marriage equality in Minnesota.

There is a great deal more at stake than talk of tax-exempt status. The question has to be is Nienstedt ready to barter the integrity of his Catholic diocese in order to stop marriage equality?

Could it be that Nienstedt is so concerned with the verses of the Bible which supposedly speak against homosexuality that he is abandoning the ones which speak against lying and bearing false witness?