According to today's issue of North Carolina's Charlotte Observer, one of the proponents of the upcoming referendum to outlaw marriage equality in the state, Rev. Mark Harris, the head of the state's Baptist Convention, wants a "civil debate" over the issue:

"But I hope we can express our positions - keep the conversation to the facts and our principles - and do it in a civil way," Harris, 45, said. "It doesn't mean I'm going to change someone else's position or they're going to change mine. "But in America, we all ought to be able to express ourselves without things getting out of hand."

Now generally when those against marriage equality claim that they want a "civil debate," the lgbtq community and our allies bristle because we know that in the past when these folks call for "calm" and "rationality," it's usually before they pull out all sorts of sundry claims about the gay community.

But I believe Harris when he says he wants a civil debate. However, I also believe that this issue has gone way past out of hand and a perfect example of this is the image below: 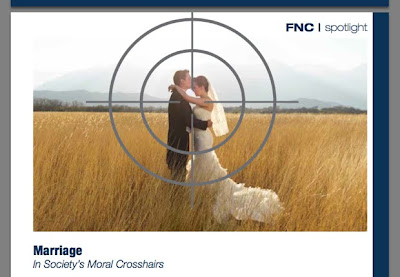 According to Jeremy Hooper of Goodasyou.org:

This is the actual graphic that the North Carolina Family Policy Council, the leading anti-equality group in the Tar Heel State, is running in its quarterly publication in order to scare citizens into voting for the state's proposed constitutional amendment banning same-sex marriage.

Maybe it's just me, but civil debates on marriage equality don't necessarily encompass images of an assassin targeting newlyweds.

If Rev. Harris truly wants a rational and civil discussion on the issue, he needs to have a serious talk with his allies.

Editor's note - The image can be clearly seen at this link on page. 13.

Posted by BlackTsunami at 2:07 PM 4 comments:

Hopefully everyone had a happy holiday. I am going to ease myself back into normalcy with a few news briefs to start things off:

Readers react to photo of female sailors’ homecoming kiss - It appears that some people aren't happy with a certain recent iconic kiss. This kiss right here:

NOM’s Christmas Gift: Deepening Desperation - Meanwhile, a certain anti-gay group is getting pitiful. I mean this is simply ridiculous, even for NOM.

Disgruntled Ex-Paul Staffer Says Paul Wouldn’t Use Gay Man’s Bathroom - That's how we "convert" people, you know. We let them use our bathrooms and when they lift the toilet lid, Rip Taylor jumps out and hits them with "gay confetti."

What If Your Child Says, I'm In The Wrong Body? - An issue which speaks for itself.

Posted by BlackTsunami at 7:12 AM No comments: