NOM continues to embarrass itself in photo scandal

The National Organization for Marriage finally admitted that it did wrong in the recent photo-stealing scandal. However, the way NOM admitted wrongdoing was in an underhanded way which totally backfired yet again.

According to Jeremy Hooper from Goodasyou.org, they replaced the lying photo with this one: 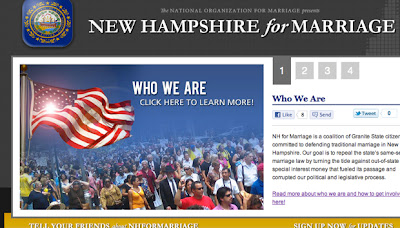 However according to Hooper, this photo is yet another misdirection:

Even though the text clearly identifies the "we" as a "collation of Granite State Citizens," what you see is the NYC march that NOM held on the very day same-sex couples began marrying in the city and state. That same rally at which the majority of marchers were bussed in from other places.

So instead of a comment admitting wrongdoing, NOM tries to cover up its lies by making yet another easy-to-detect error.

Damn. I am sooo jealous of the fun Jeremy is having right now.

Posted by BlackTsunami at 3:12 PM No comments:

Gay student viciously brutalized on video. Where the $#! is HIS anti-defamation alliance?

For all of those "people" who will defend teachers who attack gay students and same-sex families, for all of those "people" who will engage in an extreme media blitz to obscure a situation involving a student possibly harassing a gay teacher, this video is a reminder on who the real victims are. When you defend things which fosters ignorance, situations like this are expected to occur. Where is this young man's defense fund?:

More information about this situation on Towleroad.

Linda Harvey: I Should Sue Wayne Besen - I WISH she would. I really do. I got so much stuff in my "Linda Harvey archives" which needs to be used.

Guest column by Ron Hill: Feds Help Anti-Gay Hate Groups Raise Cash - A post for the ignorant people who say that we shouldn't give any of the religious right groups attention.

Illinois Republican Senators Unanimously Support Discrimination Against Same-Sex Couples - How long will it take for NOM to trumpet this futile gesture while ignoring the pictures it stole?

From Joe Jervis of Joe.My.God. comes this monstrosity:

Earlier this week, I wrote about how the "Florida Family Association" was complaining about how MTV was supposedly  "promoting homosexuality" by airing a public service announcement from the Trevor Project during one of its shows, Degrassi.  The Trevor Project is an organization devoted to preventing suicide amongst lgbtq youth.

There was specific anger towards Target because it is a main advertiser during Degrassi.

Now it seems that the American Family Association has now undertaken a campaign against Target via its group One Million Moms.

The Trevor Helpline promotion aired during the "Beat It" episode of Teen Nick's Degrassi series when teen Riley, the openly gay football captain and starting quarterback, declined reparative therapy for his homosexuality. Not only is Teen Nick now featuring a show that encourages the nation's youth to embrace alternate lifestyles, but the family retail chain Target Corporation is helping through sponsorship. Upon discovering that Target Corporation is one of the main advertisers during the shameful and inappropriate program Degrassi, OMM is disappointed and the retail chain needs to be held accountable. At least three Target advertisements appeared during each episode of Degrassi this past weekend. They are openly recruiting teens and children to become 'gay' on a program that also promotes the transgender and homosexual lifestyle.

The idea that the AFA's campaign is vile and disgustingly homophobic is a given. What gets me is the group the organization is using to promote it. No doubt by pushing this campaign via astroturfed One Million Moms, AFA is pushing the implication that mothers are concerned by the so-called promotion of homosexuality.

Seems to me that any true mother would be more concerned with keeping her child from committing suicide, no matter if that child is gay or heterosexual.

Posted by BlackTsunami at 5:05 AM 3 comments: