Principal resigns after controversy regarding anti-gay comment to student

She told a lesbian student that she was going to hell. Now she can go to the unemployment line. From the Human Rights Campaign:

We told you earlier today how Bond came under fire after recently telling a lesbian student she was going to hell because of her sexual orientation. You responded quickly - in just four hours, more than 5,000 of you signed our petition calling on the Haywood County School District to investigate the allegations. This afternoon, Bond announced her resignation.

In a statement, the school district said:

Thank you for your swift action in standing up to homophobia!

Of course the question is how long will it be before she is presented as a victim of alleged gay bullies by the National Organization for Marriage or the Family Research Council?

I hope soon. I'm just itching for a fight.

Posted by BlackTsunami at 2:39 PM 5 comments:

THIS is how you break down the dangers of an anti-gay amendment:


117 partners have joined the coalition — including the NAACP, Southerners on New Ground, the Libertarian Party of North Carolina, and numerous faith congregations.

We have 30 staff and seven field offices across the state.

We have more than 2,000 donors who have given $92 on average — the grassroots donors are with this campaign. We have raised our money in $10, 100, 250 and 1,000 chunks and we are ahead of schedule with what we have raised from that category.

Important validators such as Senator Kay Hagan, Lt. Governor Walter Dalton, the conservative Carolina Review, libertarian thinker Michael Munger, Myers Park Baptist and others have come out in opposition to the amendment in recent weeks.

NOM, ADF protect sanctity of church/state marriage - So churches should stand against marriage equality even though it's not necessarily an issue pertaining to them because no churches are forced to marry same-sex couples. Okay.

Perkins Claims that Gay Rights Advocates 'Want to Silence the Church' - I DESPISE Tony Perkins but even I'm astounded here. Read how he connects the lgbtq community to an issue having ABSOLUTELY NOTHING to do with us.

National Organization for Marriage's anti-gay project is a colossal failure 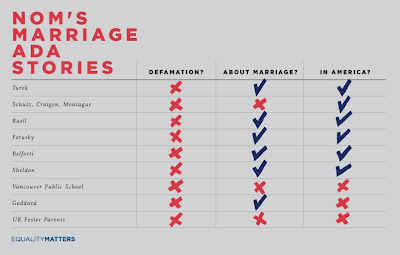 From Equality Matters comes proof that the National Organization for Marriage's "big project," the Marriage Anti-Defamation Alliance, is not only tanking but also revealing the duplicity of NOM's claims gays being bullies:

Last September, the National Organization for Marriage (NOM) launched the Marriage Anti-Defamation Alliance, a website dedicated to documenting Americans who’ve had their “rights and dignity” denied by supporters of marriage equality.

. . .  As of today, however, it’s been nearly two months since NOM’s Marriage ADA has posted a new video. The site has posted a total of nine videos since September -- roughly two a month -- and few if any of those videos depicted instances of actual defamation.

. . .out of NOM’s nine Marriage ADA stories, three weren’t about marriage, three were from a different country, and zero demonstrated an instance of actual “defamation.” It should come as no surprise that NOM had such a difficult time finding any compelling evidence that opponents of marriage equality were having their “rights and dignity” threatened and denied. NOM’s “gays as bullies” narrative has already been exposed and rejected by a number of judges and courts across the country. Though the group hailed Marriage ADA as a “huge new step” to restoring civility to the debate over same-sex marriage, the project seems to have sputtered into little more than an expensive example of how dishonest NOM’s self-victimization meme really is.

Carlos Maza breaks down the lies of each case with incredible detail. Check it out.

Posted by BlackTsunami at 4:57 AM 4 comments: