According to Media Matters, the Southern Poverty Law Center named the Alliance Defending Freedom as an official anti-lgbt hate group. Media Matters breaks down 10 facts you should know about ADF.

They are listed below and should you want further information, go this very thorough link:

1. SPLC Labeled ADF A Hate Group Because Of Its Extreme, Demonizing Lies About LGBT People.

2. ADF Boasts A $48 Million-Plus Annual Budget And Over 3,000 “Allied Attorneys.” - Editor's note: Let met just break in here because I want to address those folks who constantly claim that if we ignore anti-lgbt groups and their actions, they will go away. When an organization has a budget of over $48 million and over 3,000 attorneys dedicated to eradicating your equality, it is not going ANYWHERE.

3. ADF Defended The Constitutionality Of Criminalizing Gay Sex In The U.S.

5. ADF Is Behind The National Push For Anti-LGBT “Religious Freedom” Laws.

8. ADF Believes In A “Homosexual Agenda” Dedicated To Destroying Christianity.

9. ADF Has Long Opposed Anti-Bullying Efforts In Schools And Even Launched The “Day Of Truth” To Combat The “Day Of Silence.”


But if you want a general idea of how deceptive ADF is, check out the following video the organization posted asking Trump to "defend" the practice of "religious freedom," i.e. allowing people and businesses to discriminate against lgbts and in some cases, still be able to receive tax dollars. The video is 47 seconds and is very straightforward, so straightforward in fact that you may miss how it is deceiving you:

The summary of the video says the following:

Grace Youth and Family Foundation, one of thousands of faith based organizations that contribute a trillion dollars in services each year while serving their communities. They face giving up the very faith that drives them to serve or stop serving those who need it most


Have you guessed how this video is deceptive?

The video doesn't explain this and I'd wager that it is because this charity is in no such danger.

It's all about images.

You see, when organizations like the ADF push the idea of  "religious freedom," the image they seek to peddle are  that of noble charities and so-called moral individuals forced by the government to  abandon their personal beliefs for the money. They want to push images of upstanding Christians being forced to submit to the wishes of a so-called godless horde, be it bureaucratic or lgbt-oriented.

Organizations like the ADF don't want you to think about the lgbt families with their children or the lgbt youth who would be hurt by allowing people and businesses to discriminate against them.. They don't want you to think about the gay or lesbian couple who won't be able to get married because the clerk refuses to do his or her job while freely taking their tax dollars.

They don't want you to think of the possibility of the gay couple who could be denied fair treatment at hospitals if either of them or (shudder) any of their children are hurt because the registered nurse or the physician can pull the "religious freedom" card.

They don't want you to think about the significant ways lgbts lives could be disturbed by these "religious freedom" laws which would allow people to disrespect or devalue us while, in some cases, still taking our tax monies

This truth is what ADF and other like-minded organizations don't want you to know about. And the fact alone that they work so hard to hide this truth makes them worthy of being called  hate groups
Posted by BlackTsunami at 3:26 PM 3 comments:

I think that it's safe to assume that there is a small but satisfying degree of panic within the religious right that their "meal ticket to power," Donald Trump is in trouble.

The anti-lgbt hate group, the American Family Association is pointing the finger of blame at a supposed "evil conspiracy" for the recent resignation of National Security Advisor Michael Flynn. Flynn was forced to resign after it was discovered that he was illegally communicating with Russia before Trump took office and lying about it.

But the American Family Association thinks the following: 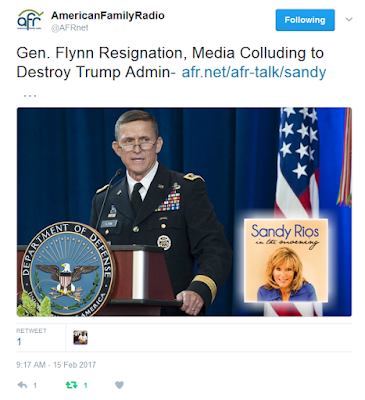 And then there is this lovely gem in AFA's  phony news site, One News Now - A man named Flynn and a media feeding frenzy.

It reads as such:

The media's gleeful reaction to Flynn's resignation has set off a firestorm of criticism from media watchdogs such as MRC and others who see a behind-the-scenes effort from Obama loyalists to damage the Trump administration. "The political assassination of Michael Flynn," a story written by Bloomberg columnist Eli Lake this week, describes an enemy of the Left who was targeted for retaliation – with other Trump loyalists targeted for the next round of attacks.


Lastly, there is this lovely statement courtesy of Bryan Fischer:

What I Learned From ‘Gender Revolution’ - Katie Couric learns something we all need to learn.

‘Donald Trump’s Think Tank’ admits ‘religious freedom’ means anti-LGBT discrimination - Because anti-lgbt organizations like The Heritage Foundation won't compromise  so why should we?