The above video is the essence of the term "going too far."

This video by World Net Daily writer Molotov (and believe me when I say that the name fits) Mitchell has been around for months. It was shocking when I first saw it and when I view it now, I am still repulsed.

In this video, Mitchell criticizes Rick Warren for speaking out against the infamous Ugandan "kill the gays" bill.

And just so that no one mistakes his position, Mitchell goes into detail as to why he thinks Uganda is correct for pushing this bill, which goes as far as punishing gays and lesbians with the death penalty.

The Bible is totally on Uganda's side,

Uganda is merely reacting because an "evil homosexual king, Mwanga" raped young boys and murdered a group of them who would not have sex with him (never mind that this incident took place between the years of 1885-1886),

If gay Ugandans don't like the law, they can leave,

and the Founding Fathers would have agreed with Ugandans. I believe his words were (at 2:51): "Ugandans are making decisions that our very Founding Fathers made so long ago but we are terrified to touch today."

But the most offensive item from this video comes at 3:00 when Mitchell actually evokes the words of Dr. Martin Luther King, Jr. to justify not only this bill but his labored defense of it: "Like the great Dr. King told us, 'the moral arm of the universe is long but it bends towards justice.' Ugandans, stay on the right side of history."

Mitchell's diatribe is probably the most disgusting thing I have ever seen and the fact that he actually evokes the words of Dr. King, a man who died for the causes of justice and nonviolence, to support a bill which would create genocide is beyond foul.

Both communities need to recognize that while they are playing a useless game of position, people who share both identities (gay and black) are getting wiped out.

Posted by BlackTsunami at 9:17 PM 7 comments: Links to this post

Meet CPAC speaker, "XPAC" youth outreach leader and gay-hating bigot Kevin McCullough - The title of this post states the obvious but I've jumped all over Kevin McCullough on several occasions for inaccurate homophobic statements he has made. It's time for someone else to get in on the fun.

Video: And the winner of #CPAC10's 'Who'll 1st liken us to Hitler?' contest is... - And where would a right-wing conference be without ugly references to our families?

VA Anti-Gay Gov. McDonnell Strips LGBT Employees of Protections - And we should be surprised because . . .?

Posted by BlackTsunami at 3:21 PM No comments: Links to this post 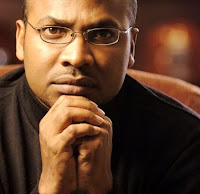 It's getting increasingly clear that neither Peter LaBarbera nor Paul Cameron has anything on anti-gay Ugandan pastor Martin Ssempa when it comes to stigmatizing the gay community or being a walking Freudian slip.
Check out his lastest exploit:

The screening was attended by around 300 supporters crammed into an evangelical church in the Ugandan capital after plans for a "million-man march" were thwarted by police.

"We had planned to have a million-man and -woman march in Kampala but unfortunately we were told that we could not march because of security concerns," Martin Ssempa told the crowd.

"The major argument homosexuals have is that what people do in the privacy of their bedrooms is nobody's business but do you know what they do in their bedrooms?," the pastor asked.

Ssempa then displayed a slide show of gay pornographic pictures.

"This one is eating another man's anus (eds: correct)," the pastor said, before going into graphic scatological descriptions.

Of course some folks weren't happy over this:

Noma Pakade, from the African gay rights group Behind the Mask, accused the pastor of perpetuating violence by his anti-gay campaign.

"Showing pornography in church in the presence of minors is twisted homophobic propaganda, where homosexuality is equated to paedophilia and pornography," she told the BBC.

"It is not surprising, but rather disappointing, that in Africa in the 21st Century yet again discrimination and prejudice is legitimised through religion."

I'm praying that the horrid bill he supports doesn't become law, but already, I think, Ssempa has reached the plateau where people are wondering is he fighting against gays or maybe some hidden urges in himself.

Last week, various blogs (this one included) brought you an interview with discredited researcher Paul Cameron from Midweek Radio Politics.

In the interview, Cameron claimed that according to a "new study" (done by him of course), gays serving in the military are four to seven times more likely to rape their fellow servicemen.

Just par for the course when it comes to Cameron's continued attempts to demonize the gay community.

The man is disgusting, but remember that he is also the one who formed the basic building blocks of religious right junk science used against the gay community.

Posted by BlackTsunami at 4:47 AM No comments: Links to this post