Ebony magazine puts out lesbian on the cover 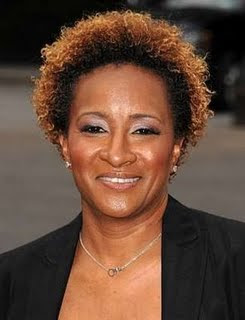 For the first time that I can remember, Ebony magazine has placed an out-of-the-closet lesbian on the cover.

Comedian Wanda Sykes has graced the cover of the magazine as a part of its Power 150 list.

Sykes, an immensely talented Emmy-award winning comedian,  came out last year during a Las Vegas rally in response to the Proposition 8 vote. Earlier last year, she married her partner, Alex and this year, the two became the parents of twins.

Granted, her cover is just one in a collection of eight covers, including that of Chris Rock, President Barack Obama, and Al Sharpton.

And also, unfortunately, the short blurb on her in the magazine makes a highly guarded, tiptoeing mention of her orientation.

But still, it's not a bad thing.  And I should also note that the same issue of Ebony contains a very good interview with the openly gay director of the hit movie Precious, Lee Daniels in which he acknowledges his orientation.

These developments in Ebony magazine aren't necessarily the same as a door opening for lgbts of color, but they are a start.
And yes they are somewhat of a big deal.

Every lgbt issue in the media need not surround Adam Lambert or Perez Hilton.

Posted by BlackTsunami at 2:24 PM 4 comments: Links to this post

While Britain and Canada Stand Up to Uganda, U.S. Races to the Bottom - Speaking of which, the United States needs to be on the ball ourselves regarding Uganda.

Holy Bullies and Headless Monsters ranked #11 in the top 25 gay activists sites - A little ego-booster never hurts anyone. I am appreciative when someone notices my work.

Posted by BlackTsunami at 9:34 AM No comments: Links to this post

The voices of lgbts of color must be heard

This video, courtesy of a good friend of mine, Wayne Besen, is in response to another ignorant piece I read this weekend. The piece was about the lgbt and African-American communities and, like all pieces written about that sort of thing, chose to divide the two communities.

I've read ignorance like that before and it exasperates the hell out of me. And then more mentally defeating are the responses by wannabe gay activists who are so quick to either brand the entire black community as racist or play the game of "ignore lgbts of color" with as much finesse as the original column they were responding to.

My take on the entire thing is this - both communities are selfish in that there are elements in the black and lgbt community who need to stop boggarting the situation.

My advice to those in both communities is stop screaming so loud that you refuse to acknowledge those in your community who don't have the resources like Ebony or Jet magazine or BET or whose issues won't be on the front burner of discussions in the Advocate or on Michelangelo Signorile's show.

Your issues are important but not the only ones which should be given some degree of attention.

The problem is getting not only the black community but also lgbt community at large to acknowledge it.