Matt Barber of the Liberty Counsel has become the second religious right figure to comment on the murder of Ugandan gay activist David Kato:

At least he condemned the murder of Kato. Peter LaBarbera, who commented earlier today, didn't issue a word of condemnation regarding Kato's murder in his tweet. Editor's note - in another tweet, LaBarbera called Kato's murder "awful."

Smooth, Matt. Although your definition of  "pro-family Christians" leaves a LOT to be desired.

And does what you said about the first person to call another a "Nazi" in an argument count for calling someone a "fascist?"

If so, you lose again.

Posted by BlackTsunami at 6:12 PM 3 comments:

Apparently I was a couple of hours too late when I wondered whether or not someone from the religious right would make a statement about David Kato's murder:

Not even a word for sorrow for Kato. How nice.

For the record, many of us never felt that Palin was the blame for what happened in Tucson. I personally felt that she got of the blame - unfair it may have been - because of  her gung-ho attitude and reliance on nasty rhetoric. She exploited that image to gain prominence, so subsequently what happened was a classic case of the image backfiring on her.

Lively, on the other hand, isn't such a victim or circumstance.

He was one of the Americans who came to Uganda to hold anti-gay rallies  which pushed all sorts of lies about lgbts. These lies got folks stoked up and led to the infamous "Kill the Gays" bill.

The bill sent everything into a fever pitch, culimating with lgbt Ugandans having definite fear for their lives in the backdrop of rabid homophobes holding marches with children, spreading nasty propaganda about gay sex in churches, and publishing people's pictures in a newspaper while advocating their murders simply because they are lgbts.

Kato was one of those people whose picture was published.

Say what you will, Lively is not the victim here. And if LaBarbera was any type of decent Christian, he would have least said a word of concern for Kato.

It's sad that Kato's murder is the end result of how one person's hatred can cause a situation that he may not have intended to happen.

And what's sadder is the simple fact that those who should learn from this tragedy, i.e. LaBarbera and company, seem to be ignoring the lesson of pushing hate.

Slouching Towards Kampala: Uganda’s Deadly Embrace of Hate - Box Turtle Bulletin's excellent report on the homophobia in Uganda from the beginning to where we are now.

One more thing - I nearly held back from writing this post because I knew that some folks may feel the need to write LaBarbera and give him a peace of their mind. If you can't do this in a mature way, please don't bother. Hatred only breeds in places where rationality is absent. We know that LaBarbera has taken up root in these places. There is no need for us to compound his ignorance.

Posted by BlackTsunami at 4:02 PM No comments:

Both President Obama and Secretary of State Hilary Clinton issue statements condemning the murders and showing solidarity with the lgbt community worldwide:

“I am deeply saddened to learn of the murder of David Kato. In Uganda, David showed tremendous courage in speaking out against hate. He was a powerful advocate for fairness and freedom. The United States mourns his murder, and we recommit ourselves to David’s work.

At home and around the world, LGBT persons continue to be subjected to unconscionable bullying, discrimination, and hate. In the weeks preceding David Kato’s murder in Uganda, five members of the LGBT community in Honduras were also murdered. It is essential that the Governments of Uganda and Honduras investigate these killings and hold the perpetrators accountable.

LGBT rights are not special rights; they are human rights. My Administration will continue to strongly support human rights and assistance work on behalf of LGBT persons abroad. We do this because we recognize the threat faced by leaders like David Kato, and we share their commitment to advancing freedom, fairness, and equality for all.”

We are profoundly saddened by the loss of Ugandan human rights defender David Kato, who was brutally murdered in his home near Kampala yesterday. Our thoughts and prayers are with his family, friends, and colleagues. We urge Ugandan authorities to quickly and thoroughly investigate and prosecute those responsible for this heinous act. [snip] This crime is a reminder of the heroic generosity of the people who advocate for and defend human rights on behalf of the rest of us -- and the sacrifices they make. And as we reflect on his life, it is also an occasion to reaffirm that human rights apply to everyone, no exceptions, and that the human rights of LGBT individuals cannot be separated from the human rights of all persons. Our ambassadors and diplomats around the world will continue to advance a comprehensive human rights policy, and to stand with those who, with their courage, make the world a more just place where every person can live up to his or her God-given potential. We honor David’s legacy by continuing the important work to which he devoted his life.

And now the pivot gets worse for other Ugandan lgbts:


Fears were growing last night over the safety of Brenda Namigadde who is set to be deported to Uganda, where a leading gay rights activist has been found murdered.

Namigadde was ordered to leave Britain after a judge ruled she was not homosexual.

Campaigners say she could be jailed for 14 years if she returns to the African country, where homosexuality is illegal and there is political pressure to make it punishable by death.

I wonder if Peter Sprigg, Matt Barber, Tony Perkins, Peter LaBarbera,and the rest of the religious right will issue some type of statement here.

Or maybe it would be better for them to shut the @!& up.

Posted by BlackTsunami at 3:03 PM 2 comments:

From Goodasyou comes this little morsel from Chris Barron of GoProud, the bootlicking gay conservative group:

Really Chris? The "gay left" is angry, hateful, and dumb as shit

Bear in mind that Barron is the SAME man who leads the SAME organization (GoProud) which welcomed into its fold, with open arms, Andrew Breitbart.

Andrew Breitbart is the same guy who:

And Breitbart isn't just a simple member of GoProud. They made him a member of the board.

Well its obvious that Breitbart brings the angry and hateful to GoProud. But in regards to the "dumb as shit," I think the organization handles that label pretty well on its own.

How else can you aptly describe an group of gays and lesbians welcoming into its fold a man so anti-gay that he would make Anita Bryant pause? 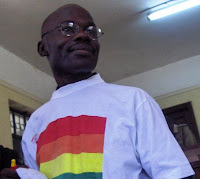 Last week, anti-gay activist Scott Lively whined in a local Boston newspaper that he is being unfairly criticized for his stances against the lgbt community, including playing a huge role in the creation of the infamous "kill the gays" bill in Uganda.

After an incident in Uganda yesterday, he may want to keep his mouth shut:

An outspoken Ugandan gay activist whose picture recently appeared in an anti-gay newspaper under the headline “Hang Them” was beaten to death in his home, Ugandan police said on Thursday.

David Kato, the activist, was one of the most visible defenders of gay rights in a country so homophobic that government leaders have proposed to execute gay people. Mr. Kato and other gay people in Uganda had recently warned that their lives were endangered, and four months ago a local paper called Rolling Stone published a list of gay people, and Mr. Kato’s face was on the front page.

At press time, the police do not view Kato's murder as a hate crime, but a robbery. However some lgbt activists in Uganda disagree:

Gay activists . . . said Mr. Kato was singled out for his outspoken defense of gay rights. “David’s death is a result of the hatred planted in Uganda by U.S. Evangelicals in 2009,” said Val Kalende, the chairperson of one of Uganda’s gay rights groups, in a statement. “The Ugandan government and the so-called U.S. evangelicals must take responsibility for David’s blood!”

Mrs. Kalende was referring to visits in March 2009 by a group of American evangelicals who held anti-gay rallies and church leaders who authored the anti-gay bill, which is still pending, attended those meetings and said that they had worked with the Americans on their bill.

One of the those activists was Scott Lively He even bragged that the 2009 visits created a "nuclear bomb against the gay agenda in Uganda."

Ssempa and eight others had been charged with spreading rumors that Kayanja was gay, which is supposedly a common way to settle political scores in Uganda, but has deadlier implications since the controversy about the anti-gay bill.

David Kato was a spokesperson for Sexual Minorities Uganda (SMUG) and one of the plaintiffs (or applicants) in the successful lawsuit seeking a permanent injunction against the Ugandan tabloid Rolling Stone (no relation to the U.S. publication of the same name). Kato was one of three applicants who had been named by the tabloid under a headline tagged “Hang Them!” His photo appeared on the tabloid’s front cover.

LGBT Ugandans have lived under a menacing atmosphere for more than a decade. The anti-gay hysteria has increased significantly since the introduction of the draconian Anti-Homosexuality Bill into parliament in 2009. That bill, which remains under review Parliamentary committee, would impose the death penalty on LGBT Ugandans under certain circumstances and criminalize all advocacy by or on behalf of LGBT people. It would also criminalize even knowing someone who is gay if that person fails to report their LGBT loved one to police within 24 hours. Parliamentary elections are scheduled for February 18, and the bill is expected to be considered after Parliament returns for a lame-duck session before the new Parliament begins in May.

Now in all honesty, we do not know the truth behind Kato's murder at the present, so it may be unfair to blame Lively. Certainly he never told people to kill anyone. And according to him, he never agreed with the death penalty facet of the Ugandan anti-gay bill.

But he did fan the flames of hatred towards lgbts in Uganda and that's the funny thing about fanning flames.

They always get out of hand and sooner or later, someone gets burned.

Posted by BlackTsunami at 5:08 AM No comments: