Okay, here is a secret about anti-gay groups which you probably already know.

It is almost impossible for them to admit that a course of action they have taken was wrong, misguided, or too extreme.

No matter how stupid it is, or how much criticism they receive, they won't back down. It's a somewhat admirable trait sometimes. But not all of the time. We are all human and, as such, tend to make mistakes. When we do make mistakes, we do need to acknowledge such.

So why am I saying all of this? Because of today's absolutely bat-crazy full-page ad in The Washington Post by the American Family Association. The ad implied a warning of damnation to the Supreme Court if  it rules for marriage equality later this year: 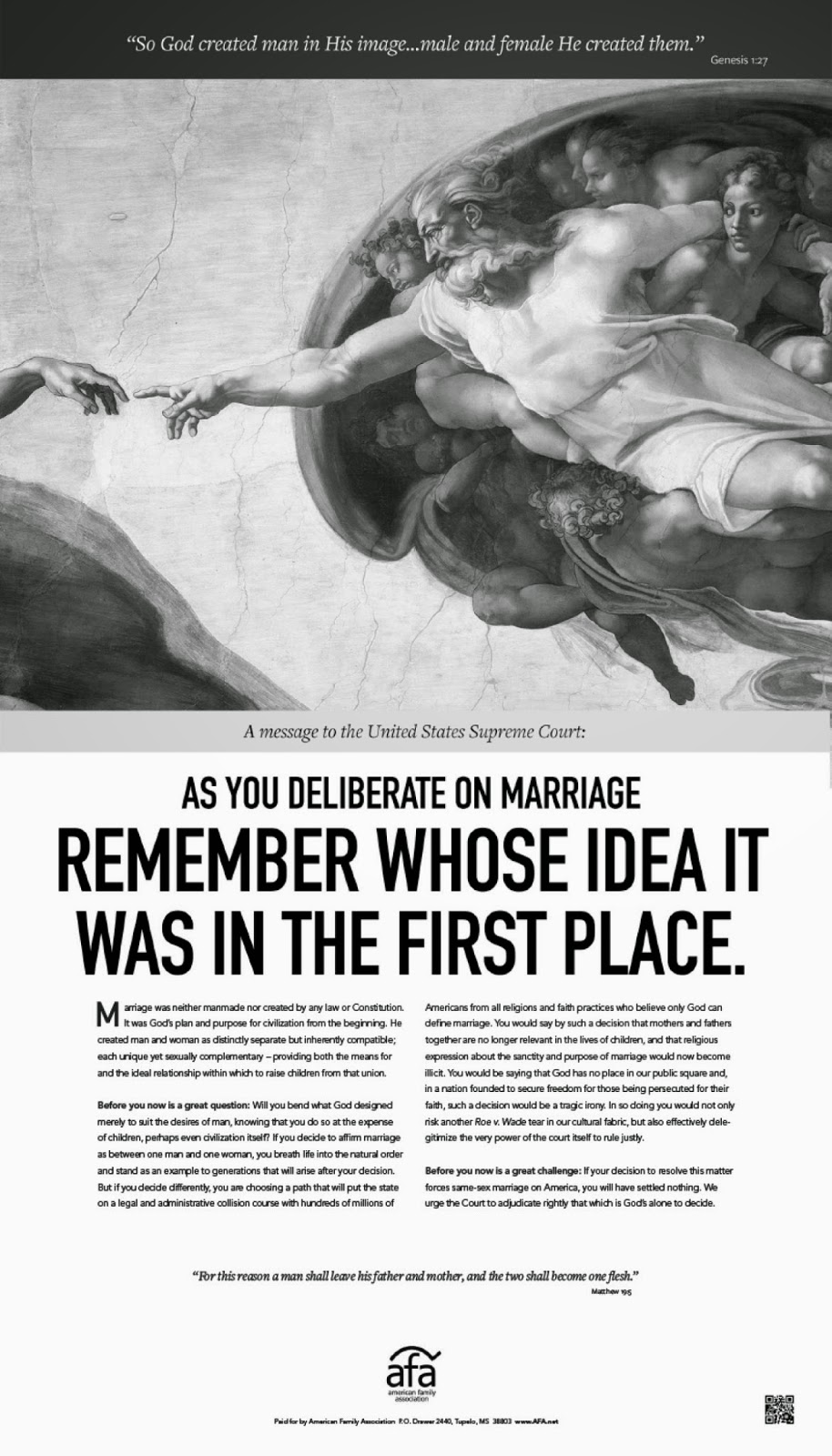 The Supreme Court hasn't even heard the case as of yet and AFA is implying eternal damnation should it rule the so-called wrong way.

Real smart, guys. And the usage of the famous painting "The Creation of Adam" was almost a nice touch. We'll just forget the fact that the artist, Michelangelo, was reputed to be gay.

And like I hinted  before, the AFA refuses to back down.. According to Right Wing Watch, its president, Tim Wildmon, issued a defiant (and scatterbrained) defense of this idiotic full-page ad:


Real nice guys. I hate to see what plans you think of to get your agenda across when you ARE using your brain.
Posted by BlackTsunami at 3:09 PM No comments:

Ted Cruz Announces Presidential Campaign At Religious Right School Stacked With Anti-Gay Activists - Yesterday, many of us laughed at the idea of Sen. Ted Cruz running for president. Today, let's look at Liberty University, the so-called Christian school where he made his announcement. I feel sorry for these students and you will too when you read who is employed there.

Russia’s Bid To Curtail LGBT Benefits At The UN Fails - Yeesh! What IS Russia's problem?

Michigan Planet Fitness Sued By Woman Who Claims They Are Too Kind To Transgender People - Girlfriend, you KNOW that is a frivolous lawsuit!

About those children of fractured families who keep blaming same-sex parenting for their issues... - I HIGHLY recommend this post to ANYONE who thinks that same-sex couples raising children is somehow a danger. Just a simple masterpiece of love and joy.


And the latest phase of lgbt equality begins:

In a landslide 63-31 vote, the Indiana House of Representatives alarmed LGBT advocates Monday by passing a sweeping religious freedom bill that allows private parties — including businesses open to the public — to invoke a religious defense in legal cases.

Gov. Mike Pence resisted calls to veto the bill Monday evening, issuing a statement that said the measure “is about respecting and reassuring Hoosiers that their religious freedoms are intact. I strongly support the legislation and applaud the members of the General Assembly for their work on this important issue. I look forward to signing the bill when it reaches my desk.”

. . .  The bill’s prime sponsor in the house, Republican Rep. Timothy Wesco . . . said the law is “modeled” after the federal Religious Freedom Restoration Act. Passed by Congress in 1993, that law and others like it at the state level prevent government from burdening a person’s exercise of religion.

. . .  However, the Indiana bill is broader than federal law. While the Indiana bill says that a “governmental entity may not substantially burden a person’s exercise of religion,” it also applies those rules to businesses and interactions between private parties “regardless of whether the state or any other government entity is party to the proceeding.”


You can read the full story on Buzzfeed.

However, before any of you become angry, discouraged, or upset in any way, it's best to put this in perspective.

We've been here before. Before we could even fully celebrate the overturning of the sodomy laws at SCOTUS in 2003, the anti-gay right bombarded us with statewide anti-marriage equality bills. The irony was at that time, a lot of us (me included) didn't even conceive the idea of gays and lesbians getting married.

It took a while - quite a long while - but many of us got in engaged in the struggle for marriage equality and thanks to our perseverance and the tendency of our opposition to either go too far, underestimate us, or over overestimate themselves, we are looking at the possibility of a huge victory this year.

This is not to say that we should take these "religious freedom" bills lightly.  They are certain to pass in several other states and we are going to have to dig down and fight against them.

It's just a matter of perspective. The late social reformer and civil rights activist Frederick Douglass once said "Power concedes nothing without a demand. It never did and it never will."

We've been here before.

Posted by BlackTsunami at 4:53 AM No comments: