On the risk of sounding preachy (oh the hell with it, I might as well), I think it would do our community some good to focus less on trivial things, such as wondering if Green Bay quarterback Aaron Rodgers is gay, and more on things like this:


In NFL Characters Unite, Cruz meets 19-year old Joey Kemmerling, who came out when he was a middle school student. Joey was relentlessly bullied for years because of his sexual orientation. Classmates called him hateful names, physically hurt him and even threatened to light him on fire. The school locker room was a particularly painful and dangerous place for Joey, as much of the taunting took place there. At one point in high school, the situation got so bad that he contemplated suicide. With the support of his mother, Joey was able to move past the homophobia and harassment he experienced and he decided to use his voice to help stop bullying. He launched a youth-led anti-bullying organization, became active with the nonprofit GLSEN and has spoken to groups of students, educators and even members of Congress. Now, thanks to Victor Cruz, he gets an opportunity to clear another hurdle: revisiting a locker room, a place that still conjures up painful memories. Cruz takes Joey on a tour of the New York Giants locker room to help him put the agony of his past truly behind him. Joey gains closure he needs to continue on his path to full recovery and learns to Never Say Never to overcoming his fears.

Posted by BlackTsunami at 3:25 PM No comments: 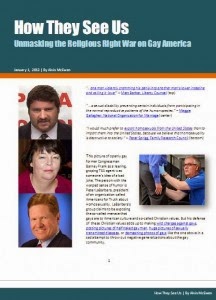 Editor's note - Today marks a very special anniversary for me. On January 8, 2013, I published How They See Us: Unmasking the Religious Right War on Gay America. Since that time, I have no doubt driven a lot of you crazy with my constant promotion of the booklet. However, there is a method to my supposed madness. I'm not naive to not realize that one day, Holy Bullies and Headless Monsters will exit the public arena of blogging. I know that one day, I may get too tired, too burnt out, or something else of an emergency nature may cause me to cease this blog.  And when that day comes, I want to leave something of a legacy. I want to leave a reminder about what we fight. We aren't fighting religions, nor people in a general sense. We are fighting ignorance and lies peddled by those who seek to exploit fear and religious beliefs. The lgbt fight for equality is about dignity, respect, embracing our God-given right to self-determination, and the ability to fully embrace our sexual orientations without fear of reprisal. Most of all, I want to empower the lgbt community (especially our lgbt children) to fight the principalities and organizations which seek to keep us shackled in a second-class status. And fight to win.

So, as I have always done, I encourage folks to read, download and share How They See Us either via new site established in December or via Scribd. We will win this fight. Of that I am most certain.

2014 may be the year of decision for marriage - How do you know when you have lost the fight against marriage equality? When you write an column in a right-wing publication calling for a constitutional amendment against marriage equality and the majority of commentators say "you must be crazy!" It's very very rare that I would link something from that awful Daily Caller but this is a hoot.

NOM prez pretends his movement has momentum; and I'm a unicorn - And this confirms the first item. NOM president Brian Brown is getting delusional. It's okay. He gets paid extremely well for it.

Philadelphia PD Revamps Policies For Dealing With Transgendered - Good. We need more like this.

LaBarbera: Kids Better Off In Single-Parent Household Than With Same-Sex Parents - Dear Peter, the next time you whine about being called a bigot, please remember that attacking same-sex families is in fact bigoted.
Posted by BlackTsunami at 9:18 AM No comments: