By now, you have heard of Trump's latest attempt to divert attention away from how he screwed up the response to the COVID-19 pandemic and catch up to Democratic challenger Joe Biden in the polls.

Just in case you haven't -


President Trump is sending federal troops across the nation — but says it won't be another Portland-style siege.

As federal agents arrested protesters in Portland, Oregon's streets, some for seemingly no reason, Trump warned he might send more agents to other cities if their protests against racism and police brutality continued. And on Wednesday, that threat became reality, with Trump announcing he was deploying "hundreds" of federal agents to Chicago and "other cities," including Albuquerque, New Mexico.

"Murderers and violent criminals are breaking a wide range of federal laws," Trump said on Wednesday to justify his deployment of FBI, U.S. Marshals Service, DEA and ATF agents to Chicago. But Operation Legend won't be a "Portland-style deployment," Chicago Mayor Lori Lightfoot said Tuesday, citing what the Trump administration told her. These forces will apparently bolster current law enforcement efforts, not patrol the streets like they have been in Portland, Lightfoot said.


Justifiably, Trump's plan is being blasted because many rightfully see it for authoritarian hot mess which it is. Trump can't come up with a decent pandemic response, but we're supposed to believe that his sending federals agents to Chicago won't be a disaster?

One group supports him, though. Guess who?

In a tone of nonsensical hysteria it generally reserves for LGBTQ people, anti-LGBTQ hate group the Family Research Council organized and ran an ad in the Washington Times supporting Trump's latest nonsense. 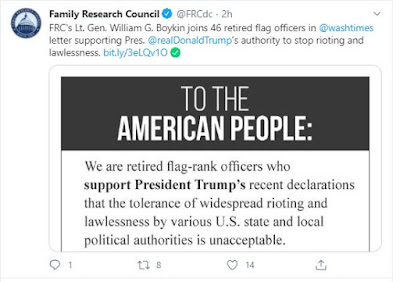 I hope no one reading this is fooled. This has nothing to do with rioting or supposed lawlessness in American cities. It's about an incompetent bozo creating one disaster to take attention away from his first disaster. But no matter what incompetent junk Trump does, he can always count on support from the Family Research Council because the group cares more about the access he gives it than being a voice of morality.

If Trump were to urinate on himself in the middle of a press conference, the Family Research Council would credit him for watering the grass.
Posted by BlackTsunami at 4:38 PM No comments: Four Myths About Trans Athletes, Debunked - And it's about time, too. Please read and share this information. There is a LOT of ignorance out there when it comes to trans athletes and the trans community in general.

Dem AGs sue Trump admin. to stop reversal of transgender health protections - A coalition of 23 states. Good for them.

COVID-19 is quietly ravaging the LGBTQ community - Take it from me. This piece don't lie.

Finally! The United States condemns queer purges in Chechnya - It certainly took you long enough.
Posted by BlackTsunami at 8:53 AM No comments: