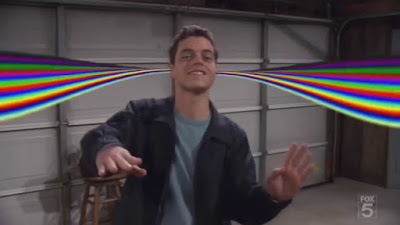 After a weekend like this, i.e. the Mueller report and the coming fight, everyone, including the LGBTQ communit,y needs all of the frivolity and silliness we can get. Hopefully this blog post will help.

Before he was an Emmy and Oscar award winning actor, Freddie Mercury portrayer Rami Malek was a young struggling actor. And at the time, his most prominent gig was 'The War At Home,' a Fox Network comedy which ran from 2005 to 2007. Malek was the secretly gay best friend of one of the protagonists. His in-the-closet, but obvious to the audience, stereotypically comedic portrayal of a  gay teen was featured prominently in the television series:

Posted by BlackTsunami at 5:07 PM No comments: