LGBTQ Americans proven right about Roger Severino. We told you he was a dishonest snake.

When it comes to former Trump appointee Roger Severino, I think I can speak for the LGBTQ community when I say:

We told you that SOB was a snake.

First, a little background. In 2017 when former president Donald Trump appointed Roger Severino as director of the Office of Civil Rights at Health and Human Services, many LGBTQ Americans and our allies loudly voiced our fear and disapproval. As an employee of several far right groups, Severino worked to undermine LGBTQ rights and safety on several fronts from the fight for marriage equality to the fight against the fraudulent practice of 'ex-gay therapy.'

In his new position in the Trump Administration, Severino proved our fears to be accurate as he instituted rule after rule designed to either erase LGBTQ rights in healthcare or allow healthcare workers - from doctors and nurses to ambulance drivers - to not treat us by citing their "religious freedom." Specifically, Severino was responsible for an attempt to create a rule which would roll back protections for the trans community against discrimination through Obamacare, and  a "conscience rule" which said any healthcare worker could deny services to LGBTQ people based on "moral or religious" reasons. In November 2019, three different federal courts struck down the rule and one court found that HHS exaggerated a justification for the rule. Severino was pointed out in an NPR article to have contributed to that exaggeration.

And while doing all of this, Severino gave out lip service claiming that "discrimination has no place in healthcare" or gaslighting people into believing that the changes were to protect people's religious beliefs

But now that Trump is gone and Biden is president, Severino no longer has to "fake it," so to speak. Since losing his job at HHS, he has joined another far right think tank (Ethics and Public Policy Center) devoted to undermining LGBTQ rights and health. In doing so, Severino has embraced a nastier tone. One can see that by the tweets and retweets he sends out smearing transgender Americans. 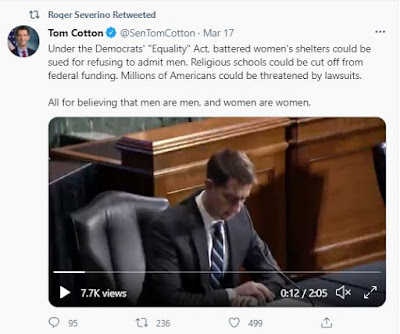 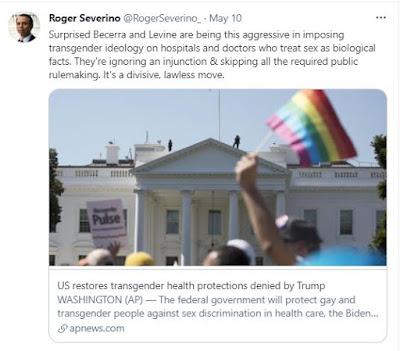 Even though LGBTQ people knew just how dishonest he was, now it should be clear.  Severino worked specifically and deliberately to undermine and destroy LGBTQ rights when it came to healthcare. It had nothing to do with religious liberty. It was all about basic prejudice, bigotry, and an incorrect but steadfast belief that LGBTQ people, transgender Americans in particular, aren't deserving of simple and basic healthcare.
The important thing here is not the discovery that Severino was exactly what we said he was, but finding out just who asked Trump to appoint him in the first place.
Posted by BlackTsunami at 5:11 PM No comments:

Defending extreme bills, Tucker Carlson once again lies about medical care for trans youth - The overrated mediocre trust-fund baby lies about vaccines. Why should we feel left out.
More anti-LGBTQ laws have been passed in the last year than any other time in American history - We seem to be the eternal wedge issue.
Evangelical Lutheran Church Elects First Transgender Bishop - Niiice!
‘The love of homosexuals is something good’: German Catholics to bless gay unions, defying Vatican ban - This is going to get interesting.
U.S. Will Protect Gay And Transgender People Against Discrimination In Health Care - Just in case you didn't hear.
Posted by BlackTsunami at 8:22 AM No comments: