This is a video which speaks for itself. Candi Cushman (Focus On The Family), Eliza Byard (Gay, Lesbian & Straight Education Network), and Rosalind Wiseman (Author,"Queen Bees &Wannabees") are interviewed by Anderson Cooper on anti-bullying legislation and most specifically Focus on the Family's attack on this legislation.

Okay, maybe I'm a little biased but Cushman doesn't have a clue to what she is talking about. Wiseman and particularly Byard are on point.

Posted by BlackTsunami at 3:48 PM No comments: Links to this post

Gays are bombing nation with messaging, says she whose nat'l presence is confined to her gay messages - Like Jason Voorhees and Freddy Krueger, Sally Kern has returned.

Gay teen saves life, honored for heroism - To those will whine "does it make a that he is gay," I say hell yeah it makes a difference. It's rare that our lgbt youth see positive images of themselves.

Posted by BlackTsunami at 9:00 AM No comments: Links to this post 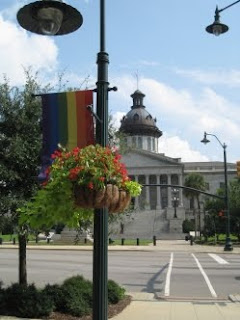 Who knew this situation with the rainbow banners in Columbia would spark so much controversy?

The irony is that the banners themselves aren't causing the controversy, but rather the "outcry" from the religious right group Palmetto Family Council.

So in essence, it's the Palmetto Family Council who is providing publicity for SC Pride.

Just yesterday, a local television station ran a spot on the situation, which you can see here. Pay special attention to the comments. Maybe it's me and my wannabe optimistic view but the comments seems to be running in SC Pride's favor.

Then this morning comes the article in the State newspaper. When one reads it, it is obvious that the narrative seems to be "why is the city funding this?"

“Our concern is the expenditure of public funds for a festival that is political or indecent or both,” said Oran Smith, president of the Columbia-based Palmetto Family Council.

Smith, who has made his assertion on talk radio and in a news release, said using public money to support the event implies an endorsement of the gay “lifestyle” by the city and county. “This goes beyond the public’s view of what is a permissible expenditure of tax funds,” Smith said.

However, the article answers that question itself:

Earlier this year, City Council voted unanimously to give more than $2 million to some 60 groups that bring tourists and boost the local economy, with money from accommodations and tourism taxes earmarked for such use. Among groups getting city money are Veterans of the Battle of the Bulge ($10,000), Riverbanks Zoo ($75,000) and EdVenture ($509,000).

County Council is awarding some $2 million in grants to more than 50 groups using tourism and accommodations taxes. Those groups include the Columbia Music Festival ($20,000), city ballet ($20,000) and the Township Auditorium ($50,000).

The groups must promote the Columbia area and draw significant numbers of visitors who spend money in Columbia businesses.

Bottom line - if people are looking for a "sexy angle" that the city is wasting money to promote a "political agenda," they won't find it.

Let's be honest here. No matter how Oran Smith and the Palmetto Family Council tries to spin the situation, they oppose rainbow banners because they oppose the lgbt community. This isn't a paradox. It's not hard to figure out. And no one should fall for the spin.

Some people don't like the idea of lgbts being open, visible, and proud. But that's their problem.

Posted by BlackTsunami at 5:00 AM No comments: Links to this post