We call them bigots because they show themselves to be bigots

A hallmark tactic of religious conservative groups is constantly complaining that they are unfairly labeled as "bigots" simply because they are supposedly defending the so-called normal time-honored definitions of morality, family, and decency.

After a good look at one organization - the Family Research Council - and its comments against the The Gay and Lesbian Activists Alliance of Washington, D.C., one has to wonder just what values are being defended.

According to People for the American Way:


The Gay and Lesbian Activists Alliance of Washington, D.C. has unveiled its "Agenda: 2010" which is "designed for educating D.C. candidates for Mayor and D.C. Council on LGBT issues" while also serving as "a resource for journalists, activists, and the general public."

Now to the Family Research Council, this a parlor trick, another plan for the lgbt community to "destroy" America:

Local groups will try to elect more homosexuals to places of power, push in-school gay-straight alliances, support D.C. sex-oriented businesses, defend adult entertainment, grant special perks to cross-dressing prisoners, force same-sex adoption, and legalize sex trafficking. Lots of people in this country mistakenly believe that this community will be satisfied when it redefines marriage. That's not the case. Homosexuals and transgenders won't be happy until they sever every moral underpinning in America. This has never been about "acceptance" or "equality" but about a devastating strategy meant to destroy innocence, the family, local communities, public health, and parental authority. 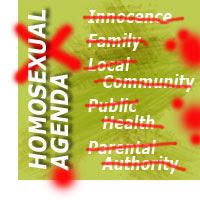 The group even added a "cute graphic" to emphasize the point.

Now just to be clear, FRC is claiming that any action of the lgbt community is suspect because we are not human beings but willing props in some plot overturn American values.

a child wanting to get through the school day without being beaten up for being an lgbt,

or an lgbt couple wanting to extend their homes to a child who needs love,

or an lgbt couple merely seeking to preserve dignity and the right to protect each other's interests in the event of one's death are all pieces of a puzzle hatched by the fevered imagination of an international cartel led by some bald man hidden in the shadows who can only be identified by his soft hands which he uses to stroke his pet Persian cat.

The implication would be hilarious if FRC and those who support the group didn't believe this drivel.

According to the American Heritage Dictionary of the English Language, a bigot is:

One who is strongly partial to one's own group, religion, race, or politics and is intolerant of those who differ.

This describes many religious right groups such as the Family Research Council. It's not enough for them to oppose homosexuality per se. They have to take it a step further. To them, we are not people. We are not human beings with feelings and emotions. By their very deeds and actions, they strip us of our humanity.

Unfortunately for the sake of parity and phony objectivity, some - including members of the lgbt community - allow religious right groups an unfair free pass by way of the excuse that their tactics and claims are mere expressions of their faith.

And then folks claim that the lgbt community guilty of the same type of actions.

I think that's unfair. Lgbts are not the ones who distort science to make some claim that Christianity is a "bad lifestyle."

Nor do we chalk all of the actions of religious right groups as an attempt to steadily trap us in a second class style of living, although if we did, we would have more than enough evidence to do so.

We call groups like the Family Research Council bigots because that is simply what they are.

The real question should be if these groups consider themselves moral and Christian, how can they justify their lies and attempts to stigmatize the lgbt community?

Uganda “Kill-The-Gays” Bill Supporter To Speak In St. Louis - Where he will probably whine about "Christian persecution." Whatever happened to the good old days when you could taking about killing gays with impunity, huh?

Baptists oppose repeal of "Don't Ask Don't Tell" - Oh please. You wanna shock me? Have them saying that they support gays serving openly in the military.

Can GetEQUAL NOW Make the LGBT Rights Movement Less Racist, Transphobic, and Ageist? - Well this conversation about GetEQUAL was BOUND to happen.

Maggie Gallagher Is VERY Sad About the Prop 8 Trial - All together now . . . AWWWWWWWWW!

Posted by BlackTsunami at 8:56 AM No comments: Links to this post

More trouble for African gays - this time in Ghana

Add the Ghana to the list of places in Africa, such as Uganda and South Africa,  where gays and lesbians are having their share of problems:

Thousands of citizens of the West African nation of Ghana attended a rally on Friday which aimed to stamp out emerging gay communities in its biggest cities.

An estimated 3,000 young people in the Sekondi Takoradi Metropolis marched in the rain, many wielding placards adorned with anti-gay slogans.

Local news website GhanaWeb reports that the protest was organized by the region’s Muslim community, following reports that gay parties and same-sex marriages had been organized recently in the suburbs.

The protest’s organisers are calling on the government to criminalise homosexuality, calling it an ‘ungodly act’.

“Ghana will suffer more than the experience of Sodom and Gomorrah, should we embrace this practice in this country,” said the rally’s leader Saeed Hamid.

It gets worse. According to the Ghana Web article, Hamid also had this to say:

He said most of the young boys involved in the practise are having health problems and are wearing pampers.

"How would you feel, if someone puts his penis into your anus?" He queried.

Talk about behind the times. Homophobes in the United States stopped linking us to diapers over 30 years ago.

Even dead gay men aren't safe in some African countries

Lesbians in South Africa getting raped as a corrective measure? What the hell?