This isn't an lgbt issue per se but a very important one in terms of how some on the right lie about not just lgbts but whomever they generally target.

In this case, it's President Obama.

Now while many on the right credited Obama for his excellent speech about the Arizona tragedy, others bent over backwards to attack the president per usual.

First, it was Michelle Malkin (the Lamia of the Right because like the so-named monster of Greek mythology, she usually targets children) claiming that the White House had something to do with the t-shirts given out at the memorial service.

When that story was debunked, Malkin gave a half-assed "okay maybe I was wrong" explanation.

But now thanks to Jim Hoft of Gateway Pundit, Malkin may have something new to sink her fangs into.

Hoft, who never met a lie so outrageous that he wouldn't spread, is now claiming that the White House asked for applause during the memorial service on the Jumbotron: 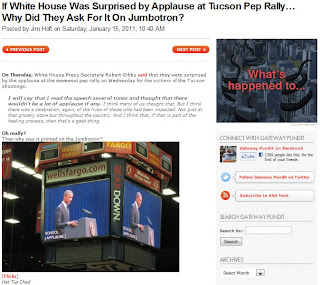 This is not only just a lie. It's a stupid lie. Hoft is using the closed captions of the speech to make this claim. Media Matters says the following:

Hoft's purported instruction for applause is actually the live captioning for the event. It's the same closed captioning that's made available for television programs.

A University of Arizona information sheet about last Wednesday's service noted that "sign language interpreters and captioning will be available at" McKale Memorial Center. Captioning is available for some large events - at McKale and elsewhere. Indeed, a release for a separate event at McKale notes that "captions will appear on the overhead Jumbotron."

But here is the kicker, according to the blog, Little Green Footballs:

And it gets better, because the other dim bulbs of the wingnut blogosphere are now co-signing Hoft’s post. Pamela “Shrieking Harpy” Geller: “TOGETHER WE WRITHE”: OBAMA MAKING HIS BONES ON THE BONES OF THE DEAD

Doug Ross: White House: we were shocked that Tucson memorial crowd hooted and hollered throughout because our APPLAUSE signs were actually quite discrete

Betcha it will probably be on Fox News next week.

And I know just how they will do it. One of the Three Witches of Fox News (think the Three Witches of Macbeth), whether it be Gretchen Carlson (the supposed dumb one), Laura Ingraham (the shrew), or Megyn Kelly (the one who takes pictures in GQ magazine looking a bit "free") will bring it up with an innocent comment such as "people are saying . . ."  or  "some controversy is now developing over . . ." knowing fully well of course that there is no controversy and the only folks who are saying anything over this are the ones spreading the lie.

THAT is how some members of the right push phony controversies, folks. It's not accidental but an intentional lie on the pretext of "innocent discussion."

Now I know we are supposed to be engaged in civil conversations with those on the right, but I'm beginning to think we'd be better off with silver, crucifixes, holy water, and stakes.

No doubt there are some who will accuse me of betraying President Obama's cry for civility by what I have just written. But I disagree.

Civility is never the enemy of calling out liars and sometimes you can successfully walk the path of calm dialogue only after calling out those whose livelihood it is to litter that path with clutter.