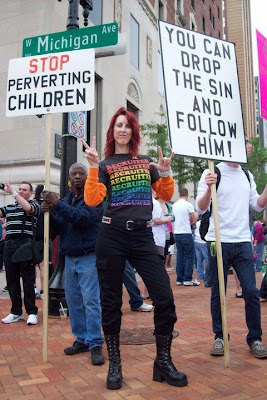 I'm proud of this day, the day when my blog has officially breached one million hits in the span of a little over five years.

What can I say but how thankful I am for those who have supported me, helped me, advised me, especially given me kind words, and most of all read my posts.

Initially the Holy Bullies and Headless Monsters blog began as an advertising tool for a self-published book I wrote of the same name. I wrote the book because I felt that the lgbtq community was not getting what it needed in terms of information to refute the lies of the religious right.

The book was published in 2007 and it was a very, very minor success. To be honest, it didn't come off like I wanted it to. One day I will go revisit it and maybe work on another edition.

But for now, it's all about this blog. So much has happened in the years I've been posting.

Marriage equality is now seen as an inevitability rather than an impossible dream.

We have an African-American president

Gays and lesbians can serve openly in the military

And most of all, our community has become more powerful. We have taken advantage of the internet age in terms of sending out information and reaching those in our community which we never have before. And we have become more sophisticated in exposing the right.

Years ago, a study like that awful one which was published recently about gay parenting would have devastated us. We wouldn't have been able to combat the junk science in it. But now we can and we have. We have become more intelligent, more consistent, and more direct in calling out the religious right when they lie on us.

I like to think that I play a part in that.

That's not to say there haven't been problems.

I do not act, I do not sing. I am not a celebrity. I do not live in a metropolitan area. I am an unconventional gay man - older, African-American, not twinkish at all, and from the South. No one is going to put me on camera as representative of the gay community no matter how much intelligence or finesse I possess and very rarely do I get the play I would like from some of the national groups or the attention I would like my blog to receive from some of the scoops I break.

And there are times in which I get depressed when I take into account the enormity of the fight for equality or when I wonder if my words are having an effect.

But those moments come and go like rain. They never stay. What does stay is my need to educate my lgbtq brothers and sisters on the basic fact that just about every negative thing said about us are lies.

The lgbtq community is as God made us and as such, we are marvelous in His eyes.

Our sexual orientations are not things that we can take on or off nor are they "conditions" which we should be ashamed of or allow the ignorant to strip us of.

I am a gay man. That part of me as a crucial to my personhood as my ethnic heritage and my very humanity. No one can take that away from me. And no one will.

And as long as you keep reading, I will keep posting. To the right corner of this blog are some of what I consider the best posts I have done in these five and a half years. If you haven't yet, feel free to indulge yourselves.

Thank you for being so transparently full of lies that you have given me more than enough material to work with in these five and a half years.

No doubt, you will continue to shuck and jive and lie in the name of God as you do those things that you think we are not hip to.

Please be aware that as long as you do them, I will be there to shine a light on your hypocrisy, laugh in your face, and expose your distortions in front of God and Man alike.

Also be aware that no matter how much money you have or influence you think you may have, the one thing you do not have and you will never have is truth.

You are going to lose this fight. Count on it.

Posted by BlackTsunami at 3:28 PM 11 comments: Links to this post

Minnesota for Marriage: Gays should be 'put to death' - There is it on the facebook page. This is not an exaggeration: 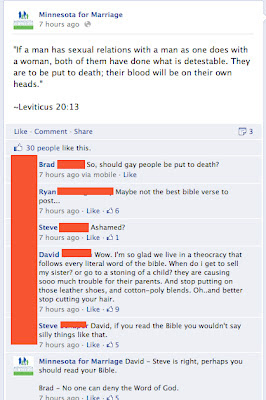 Meet The “Social Scientists” Defending The Flawed New Same-Sex Parenting Study - It turns out that the flawed study on gay parenting has flawed defenders. Surprising? No.

Maryland's Marriage Foes Are Broke - And it is also the reason why they have been able to get signatures for the referendum so easily. They have been paying a company to get them and now owe the company a huge amount of money.

U.S. May Cut Aid To Uganda Because Of Anti-Gay Crackdown - One wonders if this is one cut that Boehner and company may object to. Just asking.

Posted by BlackTsunami at 9:00 AM 5 comments: Links to this post

According to a fundraising letter sent out by the Family Research Council, several interesting names are listed as supposedly having gone on to the "dark side" of supporting marriage equality:


This week, most eyes are looking toward the Supreme Court and their decision on Obama Care, a decision that is expected most likely on Thursday.

I say most eyes, because what some national Republicans are doing on the issue of traditional marriage is worrisome, and someone has to keep an eye on them.


That's where the staff at FRC Action comes in.


The Republican National Convention is August 27 -30. The real fight however, is the week before when the Republican platform is decided.


FRC Action will be there to make sure the document that guides the Party of Lincoln for the next four years will be pro-life and pro-marriage.


Can I count on you to support our efforts?


It's important to note that Family Research Council Action is neither Democrat nor Republican. And while we certainly have plans to attend the Democrat convention in Charlotte North Carolina, the Republican Convention is the only one we have been invited to actively participate in.


We take that invitation very seriously.


Despite a majority of Americans who are pro-life and 30 states that have marriage protection in their state constitutions, we won't take it for granted that Republican Leadership will always respect that it's the social issues that have been at the heart of the party.


In conventions past, there has been controversy surrounding the pro-life plank in the party platform. This year, it appears that controversy has shifted to traditional marriage.


Strong voices within the Republican Party would like nothing more than to change the official stance in regards to marriage between one man and one woman:

I wonder how former President Bush would feel about his wife being used so precipitously in a fundraising letter.

Forget him. How about Cheney. How convenient is it that FRC comes out with this fundraising appeal days after his daughter, Mary Cheney, married her partner.

Both Laura Bush and Dick Cheney have come out in favor of marriage equality in their own way, which makes FRC's usage of them in a fundraising letter probably appropriate, if not uncomfortably odd seeing that opposition to marriage equality was the wedge issue which got Bush re-elected.

I would practically give my eyeteeth (whatever those are) to hear the reactions should he and Vice President Cheney find out about this fundraising appeal.