Editor's note - unless something incredibly juicy happens, this will be my last post for 2015. It's been wild and it's been fun. We won a lot in 2015. Hopefully in 2016, our minds will be not becoming stagnant or complacent. Hopefully we will be aggressively working on keeping what we have won and gaining more. Thank you to all of my readers and supporters. You mean the world to me. Have a safe and happy new year. And let's come back to gain more.


Here Are 15 Of The Worst Anti-LGBT Villains Of 2015 - You must always know your opposition, as well as keeping in mind that while they may have won some battles, the victory in the war has been ours.

Campaign Ad Shows The America Ted Cruz Values: Christian Crosses, Ten Commandments And Guns (Video) - In 2016, we will be electing a new president. And THIS guy is in the running. Ignore Ted Cruz at your own peril.

Indiana Lawmaker Introduces ‘Pay To Pee’ Bill For Transgender People - Another nonsensical thing we will be fighting in 2016. In 2015, the transgender community became more visible. As they did, some nasty individuals began to reduce the dignity of their lives to horror stories about who will use what bathrooms and monsters preying on children. Expect more of the same in 2016, unfortunately.

Kim Davis: ‘I am just the first of what’s going to be very many.’ - No you won't be, honey. But in the event that you will be, you ALL should expect to lose. Raise them up and the lgbt community with the law on our side will knock every single one of them down. One. By. One.

Anti-Gay Bakers Finally Pay Their Fine. Conservatives Throw Them A Pity Party. - While this article may be repeating information which a lot of you already know, it is important to take it in. The anti-gay bakers in Oregon are the epitome of anti-gay lies and deception plaguing our community and the country in general.
Posted by BlackTsunami at 9:15 AM No comments: 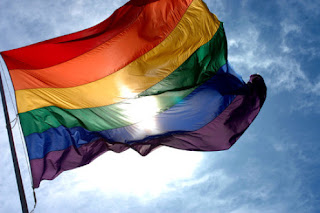 In 2015, marriage equality was officially legalized and it was about damn time.

The legalization of marriage equality represents so much. After a long campaign in which we lost many painful battles, the often dreamed possibility became a reality and millions of same-sex couples and their children had the legitimacy they should have had in the beginning.

But it means so much more.

Granted, some of our own aren't exactly happy about having the right to marry. Some claim that things like marriage is forcing the lgbt community into "conforming" to heteronormative behavior and roles. Some claim that our uniqueness as a community is falling by the wayside because we are attempting to "become" like heterosexual couples.

I don't know a thing about all of that. But this is what I do know.

So my dream was destroyed. It wasn't that I decided not to go that direction. Someone had already decided to deny me what I felt should be a crucial part of my life's desire. Needless to say,  it devastated me.  It was a nasty message sent to me that because I am gay, I am inferior. That I don't get to pick my life's paths. That I was not worthy of having a family, nurturing, or raising children, not because I didn't prove myself of being capable, but because someone else had already decided for me.

That message played a huge role in the depression which gripped me back then and it wasn't pretty. I wish I could say that now things have changed and that hurt of realizing just low I placed in the so-called pecking order of society disappeared when marriage equality became legal. But it hasn't.

Today, I'm 44-years-old and I am not pining for marriage. If it happens, great. If not, then I will be okay. But even now, there is a part of me who is still that young gay man with a void unfairly carved into his heart by the ignorance and religious self-righteousness of others. I am still that young gay man who watched his heterosexual friends love, lose, cry and go through the rituals of having a relationship while silently hating them all with such a hot jealousy that I am ashamed to admit it even now.

And I'm confused. Am I okay with no longer having the dream of being married and having a family because  I gave up a part of my soul in order to survive?  Is there a small part inside of me so deeply hidden which hasn't rejected the message I was given as a young gay man, i.e. the message saying "you're a fag. And fags don't have families, children, or happy endings."

I don't know and I don't think that I ever will know. But at this juncture in my life, I take solace that younger lgbts are no longer being told by society what I was told. I want our kids to have choices. If they want marriage, family, and the stereotypical white picket fence life, then it's there for them. But if they don't want that, then that is also okay.

But it's their choice No one  has the right to deprive our lgbt kids of their desires or dreams of however direction they want to take their lives.  And most importantly, no one has the right to inflict upon our children psychological scars which can continue to haunt them even as adults.
Posted by BlackTsunami at 4:59 AM 3 comments: