Franklin Graham upset that Biden is allowing the LGBTQ rainbow flag to fly at American embassies. He'll have to get over it.


Recently on his Facebook page, Franklin Graham whined about President Biden's decision to allow US embassies to fly the LGBTQ rainbow flag:

Just because something is “authorized,” that doesn’t make it right! Why should a flag representing one group of people and a specific agenda be literally raised up above all others and allowed to fly at our embassies and consulates? The embassies represent the United States of America on foreign soil—only the U.S. flag should be flown. Not the gay pride flag, not the Christian flag, not any other flag. The previous administration had a one-flag rule that the Biden administration has rescinded. Our U.S. flag represents the sacrifice, the honor, the unity, the patriotism—and the blood—that made America great. Pray for our nation and our leaders.

Yeah, whatever. There are a few details Graham omitted about Biden's decision:

Secretary of State Antony Blinken has authorized US embassies to fly the Pride flag, according to a State Department cable first reported by Foreign Policy. Blinken gave US diplomatic outposts the greenlight to fly the rainbow flag before May 17, the International Day Against Homophobia and Transphobia, and to keep it on display through Pride Month in June. But the top US diplomat in the cable also said that this was not mandatory, leaving it up to diplomats to "determine that such a display is appropriate in light of local conditions," per the New York Times, which also reviewed the cable.
. . . This move reverses a decision from the Trump administration, which rejected requests from US embassies to fly the Pride flag. Then-Secretary of State Mike Pompeo, who publicly opposed same-sex marriage, said only the US flag should appear on the flagpole at US embassies.

While Graham attempts to pull a "I'm not being homophobic, I just think that only the American flag should fly at US embassies" narrative, I'm willing to be that his attention - as well as that of the Trump Administration's - was brought to the situation simply because it was the rainbow flag flying at the embassies.
I personally don't see anything wrong with flying the rainbow flag at embassies. It's not mandatory, it's not permanent, and it highlights the fact that LGBTQ equality and safety is a worldwide issue. That's what scares Graham and company about the issue. It ruins their negative narratives about LGBTQ lives, families, and issues.  It reminds them that we matter.  And they hate that.
Also, if I can be just a tad vulgar, I am happy that Graham choose to write out his concern instead of giving a speech about it. I probably wouldn't have been able to understand what he was saying because I've gotten so used to his head up Donald Trump's ass these past four years. Isn't it amusing that Franklin Graham has the audacity to have spent four years doing the Humpty Dance with the devil in the White House and then think he can admonish people to pray?
Posted by BlackTsunami at 3:56 PM 1 comment: 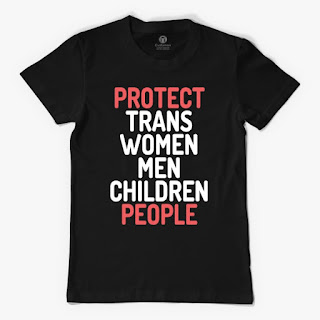 Pennsylvania gov says he'll veto ban on transgender athletes in women's sports - Good for him.
No big backlash for states passing anti-transgender laws - Not yet, you mean.
Lisa Murkowski’s GOP primary challenger is an anti-LGBTQ zealot opposed to medicine & vampires - A generation of nuts running for Congress. We are in so much trouble.
Gay Meteorologist Fired After Anti-Trump Post, Claims Bias at Work - He may have a good case.
American Medical Association urges governors to veto transgender medical bans - Immediately.
Posted by BlackTsunami at 9:19 AM No comments: