For the first time a long time on this blog, we have a two for one when it comes to religious right hypocrisy, lies, and basic hatred for LGBTQ people.

First, leave it to Franklin Graham back up Florida and Governor Ron DeSantis in their war against Disney over the 'Don't Say Gay' law: Whether or not Disney will suffer is a serious question. The popular opinion seems to be that neither DeSantis nor the Florida legislature thought their actions through when passing the bill to revoke Disney's status. And it looks like the company won't even suffer while Florida residents will see an increase in their taxes.

But this is about Graham's hypocrisy when it comes to governors and private companies. I can remember when he wasn't so congenial to elected officials, particularly in 2016:

The Rev. Franklin Graham has strongly condemned Mayor Bill de Blasio's call for a boycott of popular fast-food chain Chick-fil-A, which is opening a new location in the New York City borough of Queens, just because its Christian owners believe in the biblical definition of marriage.
"Can you imagine a city where a popular, successful business is singled out and attacked by the mayor who calls for a boycott — all because the business owners let it be known that they operate by Christian principles and believe in God's definition of marriage?" Graham, the president of Samaritan's Purse and Billy Graham Evangelistic Association, wrote on his Facebook page.
"That's exactly what just happened to one of America's most successful businesses. Chick-fil-A has almost 2000 restaurants and sales of more than $6 billion annually. You'd be hard-pressed to find anyone that doesn't like their chicken sandwiches — and their high quality service," Graham adds.
De Blasio is backing openly gay Councilman Danny Dromm who has jurisdiction over the area where the restaurant will be situated and is calling for an all-out boycott of the fast food joint, NY1 News reported.

The only thing sadder than Graham's blatant hypocrisy is the reason behind it. He supports DeSantis because the governor is acting against the LGBTQ community and he got angry at de Blasio because that mayor's actions was against Chick-fil-A's anti-LGBTQ record.
So the only consistency with Graham here is just how much he hates LGBTQ people.
And not to be outdone by Graham's homophobia and hypocrisy, the Family Research Council decided to corner the market on blatant lying with the following tweet: 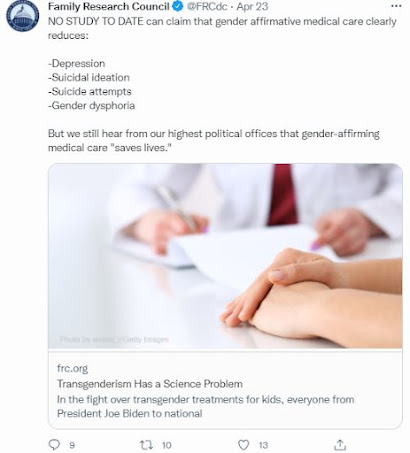 That lie is so easy to refute with the following links:
Trans Youth With Access to Early Medical Care Have Better Mental Health Outcomes
Gender-affirming care can improve mental health outcomes in transgender youth
What does the scholarly research say about the effect of gender transition on transgender well-being?
Better mental health found among transgender people who started hormones as teens
These two situations with Franklin Graham and the Family Research Council merely underscore the simple fact that for all of their talk about being religious and pro-family, we are talking about people and entities who are power hungry and willing to stoop to any level and tell any lie to gain more advantage and clout.
Christianity and morality is simply a props for them and as long as they can hide behind these identifiers, they will continue to play these games and harm LGBTQ people. Our job must be to expose them every time we have the opportunity.
Posted by BlackTsunami at 4:47 PM No comments: