According to the right-wing group Priests for Life and MLK's tired niece, Alveda King, lgbts make up one half of a three-headed monster of sexual perversion, which along with Planned Parenthood (which they failed to defund just now!), is out to "resist the Word of God ": 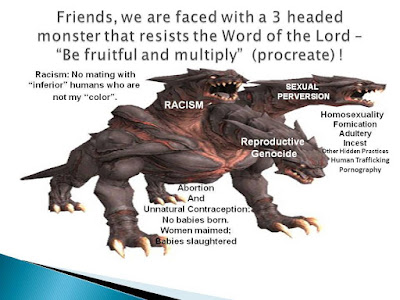 Alveda and company refers to the above as a demonic figure. I prefer to call it "Cerberus" after the  three-headed dog in Greek mythology which is supposed to guard the entrance to Hades. Cerberus is such a cool name for an evil syndicate and if they are going to accuse lgbts of being part of one, the least they could do is supply a cool name. It's definitely a lot better than "Big Gay."

Now I would usually end a post with saying something profound or witty. But come on folks, do I really need to for this one?

Posted by BlackTsunami at 3:34 PM 2 comments:

Football commentator sues Fox after being fired over anti-gay comments - THIS promises to be interesting. Notice that the lgbt community had nothing to do with his firing but we will share the blame. The commentator now works for the Family Research Council. And of course there is more to the story of his firing.

What Compassionate Conservatives Are Getting Wrong About Transgender Issues - I'll take "everything" for everything I own, Alex.

How Cake Became The Favorite Mode For Debate Over LGBT Rights, Other Issues - Fascinating article.

Republicans want to play the 'homosexuality is a dangerous lifestyle' card again - Reminder of this morning's post on the very important topic of anti-gay propaganda.

Can We Adapt Sex Ed For The New LGBT-Inclusive America? - This needs to happen, point blank.
Posted by BlackTsunami at 9:05 AM No comments:

While many anti-gay organizations and personalities are moving to a new, equally  dishonest talking point about the lgbt community (i.e. "religious liberty" vs. lgbt equality), some continue to rely on the classic meme of "homosexuality being a dangerous lifestyle."

According to a recent edition of The Washington Blade:

In the same week Republican presidential candidates are scheduled to slug it out in their first official debate, the Republican National Committee is set to vote during its summer meeting on resolutions against same-sex marriage and in favor of anti-gay sex education in schools, the Washington Blade has learned.

The Blade obtained text of two proposed anti-gay resolutions and a third relatively pro-gay counter-proposal on the table for discussion during the upcoming meeting in Cleveland, Ohio. If the RNC were to adopt any of the non-binding resolutions next week, it would be the first official act of the Republican Party on the marriage issue following the historic U.S. Supreme Court decision last month in favor of marriage rights for same-sex couples. The initial vote could take place during the executive committee meetings on Wednesday and Thursday, where a successful vote would lead to consideration at the full committee meeting on Friday.

One resolution, titled “Resolution for Balanced Sex-Ed in Schools,” was introduced by former Michigan State House lawmaker and RNC member Dave Agema. It encourages schools “teaching the homosexual lifestyle in their sexual education class” to “also include the harmful physical aspects of the lifestyle.”


For those who don't remember, Dave Agema was the Michigan Republican who, in 2013,  got into trouble for consistently posting inaccurate and outdated information on his Facebook page about the lgbt community. Information such as:

Homosexuals live unhealthy lifestyles, and have historically accounted for the bulk of syphilis, gonorrhea, Hepatitis B, the "gay bowel syndrome" (which attacks the intestinal tract), tuberculosis and cytomegalovirus .

25-33% of homosexuals and lesbians are alcoholics .

Of homosexuals questioned in one study reports that 43% admit to 500 or more partners in a lifetime, 28% admit to 1000 or more in a lifetime, and of these people, 79% say that half of those partners are total strangers, and 70% of those sexual contacts are one night stands (or, as one homosexual admits in the film "The Castro", one minute stands).


Agema claimed that he was posting his information in accordance to his faith and was "standing firm." His stance was defended by anti-gay groups such as the Family Research Council, who tried to simultaneously castigate his information while posting distortions of their own. FRC's president, Tony Perkins, even interviewed Agema on his radio program, calling Agema's information "documented facts."

And that is partly our fault. I've always believed that if a community does not settle an issue, said issue will always come back to harm the community in some way. Unfortunately, as lgbts progress towards equality, we tend to forget how powerful the image like the one above were, and in some cases, continue to be.  That's not to say that we don't have good reason to laugh at the propaganda the anti-gay right used against us because it doesn't have as much sway as it once did.

However, let's not dismiss this propaganda so quickly that we ignore that it is still out there and it does have some sway, particularly over many who either despise lgbts or whose egotistical notions about their personal faith blind them to the fact that they are bearing false witness by repeating these lies,.

Also, the  desire to laugh this propaganda off instead of talking about it plays right into the hands of anti-gay groups.They would rather cast themselves as the defenders of morality and values, the last line of defense against the lgbt community in the so-called battle over religious liberty. They generally don't want to talk about how they, for decades, used junk science and outdated medical terms to smear lgbts.  They don't want anyone to remember the time when they openly cited the work of Paul Cameron, discredited researcher who claims that gays stuff gerbils up their rectums. And they certainly don't want to talk about the myriad of times in which credible researchers and Ph.D.s  accused them of distorting their work.

Rather than helping anti-gay groups bury these bodies, so to speak, it would be in the lgbt community's best interest to dig them up. It would provide a much needed angle on this so-called culture war which should be publicly discussed.

Editor's note - For more information on anti-gay propaganda,  read or download this free adobe acrobat booklet, How They See Us: Unmasking the Religious Right War on Gay America