Conservative complains about a gay Santa, gets reminded on Twitter that it's not all about her

No doubt if I called Ellen Troxclair a wannabe in the spirit of Lauren Boebert or Marjorie Taylor Greene, she would take it as a compliment.

Troxclair is merely the latest person whose lack of intellect and general kindness are equally matched by their ignorance and mania. And like the two aforementioned, she is seeking high office. More specifically she is running for state office in Texas for "freedom," "the Constitution" and against "socialism."

That should give you a good indication as to what direction she is coming from. But just in case you need further information, check out this tweet she sent out this weekend:

You can no longer walk though the Christmas children’s section of a bookstore with your kids without being bombarded with inappropriate content -featured by staff who want to “make people” read it. Why does there have to be a leftist agenda to EVERYTHING everywhere all the time? pic.twitter.com/zUjwUy1ZOI 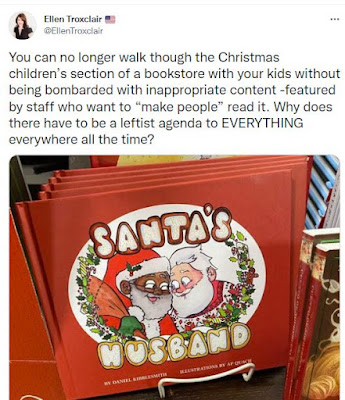 So what do you think she feels is more inappropriate? A gay Santa Claus? Or the fact that he has a black boyfriend? In the end, it doesn't matter cause girlfriend got ratioed hard. A lot of folks tweeted her back to laugh at her, while others objected to her idea that a gay couple is an inappropriate thing for kids to see.

And yes, even I participated.

Read more »
Posted by BlackTsunami at 4:36 PM No comments:

Right-wing pastor claims gay men and Big Bird are coming for your children - How come he got a memo and I didn't?
The right begins to turn on Glenn Youngkin after discovering he has an out staffer​ - I still don't like him.
Trans Activist Tells the LGBQ Community: 'Show Up for Us' - Amen. As much as I can.
Formula One racing star wears LGBTQ Pride helmet at Qatar Grand Prix - Positive visibility never hurts.
Trans Awareness Week: How Tennessee law makes LGBTQ citizens' journey hard - This is a serious problem.
Posted by BlackTsunami at 9:21 AM No comments: