Article said bills banning trans athletes was based on lies and misrepresentations. The media ignored it. 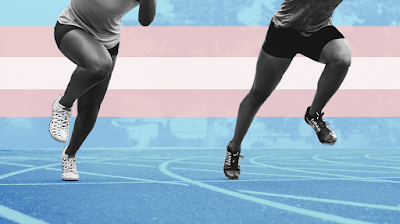 Editor's note - If it hasn't already, Texas will be passing a bill banning trans students from playing school sports.  That in itself is depressing to me, but added to that is something which underscores how trans Americans - and LGBTQ Americans in general - are being mistreated by our media. In June, the USA Today came out with an expose which proved that the laws banning trans students from playing school sports have been based on misrepresentations and lies. It was an excellent article. The problem is the rest of our media didn't seem to give a damn. The article came and went without a bang or so much as a whimper. There was simply no excuse for that, particularly in light of the fact that so many want to defend Dave Chappelle in spite of the anti-trans comments he makes.  Whatever the case may be, I am resposting my June 30 blog entry about this article. Perhaps some folks will now amplify it. But in a general sense, the entire thing is depressing as hell. It makes one wonder what's the point of exposing the truth about a situation if those who are supposed to give a damn about truth ignores it.

Across the nation, state lawmakers supporting transgender athlete bans have painted a picture that girls sports teams will be overrun by athletes with insurmountable physical advantages. But a USA TODAY investigation of the lobbying effort shows that narrative has been built on vague examples that have been overstated or are untrue, and lawmakers have accepted them as fact with little effort to verify their accuracy. The more than 70 bills lawmakers have offered in at least 36 states would suggest a bigger problem facing girls sports, but that didn’t check out either.
Instead, USA TODAY could find few transgender athletes participating and even fewer complaints about them. In South Dakota, the sponsor of a bill said a transgender girl who played basketball was “consistently scoring 25 points above females” in high school and that the Sioux Falls district alone had three transgender athletes competing in 2019. But the state association responsible for approving participation of transgender athletes says only one transgender girl has competed since 2013, and she was an average athlete who didn’t live in Sioux Falls.

Editor's note - That's just one of the cases the USA Today article revealed that those attempting to ban trans athletes misrepresented.
Excerpt 3

During a discussion at the influential Conservative Political Action Conference in February, Milstead joined former Southern Utah University runner Linnea Saltz to speak about the issue – and Saltz referred to a transgender athlete who has gained mythic status among supporters of these bills. June Eastwood, a University of Montana runner, became the first openly transgender cross-country runner in major college sports in 2019-20 after undergoing hormone therapy for a year to suppress testosterone, as required by NCAA rules. But bill proponents often exaggerate Eastwood’s accomplishments or take them out of context.

Those are three examples of religious right distortions and misrepresentations made against trans athletes in an article filled with examples. This is the type of article I hoped to write when I began this blog - the one I wish was published during the time I was attempting to come out.
Please read and share it.

Posted by BlackTsunami at 4:30 PM No comments: