'Gays for Trump' depresses the 'gay' out of me

Not every gay person is upset that the Trump Administration won't include questions of sexual orientation and gender identity from the 2020 census, and thereby rendering the lgbtq community somewhat invisible.

A group on Twitter, 'Gays for Trump', is ecstatic.

First of all, is this even an actual group? If so, I apologize in advance for how angry or depressed the following twitter exchange between me and them will make you feel: 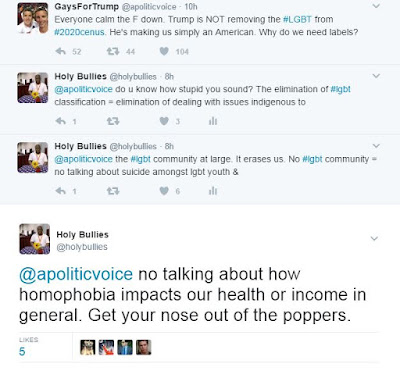 I didn't receive an answer back from the group. I would like to think that whoever is in charge of their twitter feed  read what I had to say and had an epiphany of shame. That epiphany of shame subsequently will lead him to resign his membership in such an ugly self-defeating group and he will be  dedicating his life to the advancement of all lgbtq people.

Of course I would also like to think that Rob Kardashian is my love slave and I have a feeling that I have a better chance of Rob calling me "big daddy" than anyone in the 'Gays for Trump' group recognizing their own ignorance.
Posted by BlackTsunami at 5:24 PM 1 comment:


It would seem that over the past day and a half, the Trump Administration has been making quiet, albeit, disastrous policy decisions against the lgbt community. Do you think it's to distract from the ever growing Russia controversy? There is no telling but if it is, distracting everyone's attention by attacking the lgbt community is a stupid move. You know how we are. We'll screw with Trump so bad that he will be confessing about Russian interference on twitter JUST to get us off of his ass.

Trump revokes executive order, weakens protections for LGBT workers - Why the above move is dangerous to the lgbt community.

Christians are angry Vimeo took down a 'gay cure therapy' channel - My heart BLEEDS for these fake ass Christians.

Texans' Bob McNair against Texas bathroom bill - All eyes are on Texas where a powerful man can help to sink a very transphobic bill.
Posted by BlackTsunami at 9:10 AM No comments: