In the span of less than a week, we have witnessed a meltdown of religious right talking heads against the lgbt community.

First there was the Family Research Council's Peter Sprigg who said on Hardball earlier this week that he supports "criminalizing homosexual behavior."

Around the same time came the American Family Association's Bryan Fischer who published an ugly screed saying that homosexuality should be against the law. He compounded this nastiness when he tried to backtrack explaining that he "merely" said that "homosexual behavior" should be treated the same as intravenous drug abuse

After the People for the American Way destroyed his argument, he seemed to say  "to hell with pretending to clarify" when he voiced the following opinion:

Think for a moment of the current social controversies that could potentially be avoided if homosexual conduct was still against the law.

Gays in the military: problem solved. We shouldn't make a place for habitual felons in the armed forces. End of discussion, end of controversy. If someone objects, ask them which other felonies the military ought to overlook in screening recruits.

Gay marriage: problem solved. We should never legalize unions between any two people when the union is forged specifically to engage in felony behavior. Would we sanction, for instance, the formation of a corporation whose stated purpose was to import illegal drugs?

Gay indoctrination in the schools: problem solved. We don't want to raise a generation of schoolchildren to believe that felony behavior is perfectly appropriate. That's why we spend so much money warning students about the danger of drugs.

Hate crimes laws: problem solved. We wouldn't throw a pastor in jail for saying that illegal behavior is not only illegal but also immoral. For instance, he's free to say that murder is not only contrary to man's law but also to God's law. End of the threat to freedom of religion and speech.

Special rights for homosexuals in the workplace: problem solved. No employer should be forced to hire admitted felons to work for him. End of the threat to freedom of religion and freedom of association in the marketplace.

Adding to his odious comments about "criminalizing gay behavior," Family Research Council board member and spokesperson Peter Sprigg is now speaking out on the Janet Jenkins/Lisa Miller custody case.

Sprigg seems to be voicing support for Miller's kidnapping of Isabella, the child in the center of the case.

In his piece, A Parent's Nightmare, Sprigg says.


Imagine that you are a mother (perhaps you are). You have only one child -- your own flesh and blood, conceived with your egg, borne in your body, pushed out into the world by your own exertions.

She is seven and a half years old, and for the last six years you have been her sole caretaker. Single parenthood is tough, but your parents help, and it seems your daughter is doing well. She is happy and well-adjusted. You have worked hard to support her and transmit your values to her. She goes to church with you every week.

Now, someone wants to take her away from you. Her father? No -- another woman wants to be her mother. This woman lives in a different state hundreds of miles away. Your daughter once knew the woman, but so long ago that she has no memory of her. The woman has no biological relationship to your child. She has no adoptive relationship to your child. But she wants to take your daughter away from you and be her mother now.

No court has ever found you to be an unfit mother. And yet -- unbelievably -- the courts of two states have ordered you to transfer custody of your child to this other woman.

According to a December 2008 Newsweek magazine, the case is more complicated than how Sprigg laid it out. From the article, we learn the following :

Miller and Jenkins agreed to raise Isabella together.


Jenkins said the reason why she did not file for adoption was because she was told she didn't need to because they had the civil union (the two had married in a Vermont civil union before Isabella was born).

When the two broke up, Miller agreed to allow Jenkins to have visitation rights. Jenkins even paid child support. Miller allegedly began keeping Isabella away from Jenkins, ultimately by moving from Vermont to Virginia a state which does not recognize gay marriage or civil unions.

Furthermore, the only reason why custody was transferred to Jenkins was because Miller continued to defy court orders by not allowing Jenkins to have visitation with Isabella.

In his defense of Miller's illegal actions, Sprigg makes a huge error on what the courts actually said when transferring custody:

No court has ever found Lisa to be an unfit parent. Indeed, the courts do not even claim that it is in Isabella’s “best interest” to be given to Janet. They are simply punishing Lisa for not complying with earlier orders to allow Janet visitation. (Lisa claims that Isabella had severe negative emotional reactions after earlier visits with Janet).

That statement is false. According to the Rutland Herald, Judge William Cohen said:

"The court concludes that it is in the best interest of (Isabella) that Ms. Jenkins exercise parental rights and responsibilities. This court stated that continued interference by Ms. Miller with the relationship between (Isabella) and Ms. Jenkins could lead to a change of circumstances and outweigh the disruption that would occur if a change of custody were ordered."

But Sprigg is right about one thing. The entire case is a parent's nightmare. But there is more than one parent involved. It all boils down to two points for me:

2. Why couldn't Miller have just abided by the court orders and allowed Jenkins to have visitation with Isabella like she originally agreed to?

Jenkins simply wanted time with her daughter. That's all. No plots, no plans to "indoctrinate"  Isabella into the United Sisterhood of the Knit Flannel or whatever ridiculous notion there is emanating from the right.

The fact that Sprigg and Miller's other supporters (who all claim to stand up for truth and values) seem to be encouraging Miller to continue her law breaking just underscores their hypocrisy. Truth and having values also encompasses a respect for the law.

I find the entire case disturbing but what also bother me are the consistent attempts by Sprigg and others on his side of the spectrum to dehumanize Jenkins as an outsider, an interloper, and evil vagabond witch out to steal Isabella away from Miller as a part of some sort of agenda-driven plan.

The only persons who have an agenda-driven plan here are Sprigg and the rest who are throwing out feeble defenses for Miller to continue to evade the law and expose Isabella to danger. 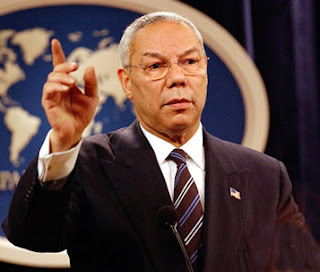 How's this for a reversal:


Retired Army Gen. Colin L. Powell, whose opposition to allowing gay men and lesbians to serve openly in the military helped lead to adoption of the "don't ask, don't tell" legislation 17 years ago, said Wednesday that he now thinks the restrictive law should be repealed.

"Attitudes and circumstances have changed," Powell said. "It's been a whole generation" since the legislation was adopted, and there is increased "acceptance of gays and lesbians in society," he said. "Society is always reflected in the military. It's where we get our soldiers from."

At the same time, he said, "we've had a lot of experience watching what other nations have done." Of 28 NATO member countries, a small minority prohibit or restrict service based on sexual orientation.

Powell spoke in an interview the day after Adm. Mike Mullen, the chairman of the Joint Chiefs of Staff, told Congress that it is his "personal belief" that lifting the ban is "the right thing to do." Defense Secretary Robert M. Gates said the Pentagon is preparing to repeal the law, despite significant opposition in Congress.

"If the chiefs and commanders are comfortable with moving to change the policy," Powell said, "then I support it." Public opinion polls since 2005 have consistently shown significantly more than half of all Americans supporting a repeal.

You will remember that Powell opposed gays serving in the military and his opposition was partly the reason why President Clinton settled on Don't Ask, Don't Tell.