NOM had better recognize that its supporters are going too far

The following comment was left on a recent post of the National Organization for Marriage's blog by a longtime NOM blog commentator and supporter Barb Chamberlan (comment 10):

It's always fascinating to Google the names of children in the grips of same-sex couples. You'll be surprised at how much information there is about them, despite their guardians' attempts to keep it a secret. You might even find the names of their real parents. Try it sometime. Of course, the opposition is too afraid to do so.


I don't know what Chamberlan's reasoning for posting that mess but I would say that NOM had better get a hold of its supporters.

Let's not even imply in the least that "seeking information" on children in same-sex households for whatever purpose is a decent or good thing. It's always fun to point out whenever NOM's phony mask of respectability slips off, but what Chamberlan seems to be implying here is downright spooky.

Marriage equality will come to Delaware!

Beating back what I can only describe as a "wall of crazy," marriage equality supporters in Delaware succeeded in making that state the 11th to legalize gay marriage:

The Delaware Senate passed a marriage equality bill Tuesday on a 12-9 vote, following the House's passage of the bill in late April.

Speaking in favor of the bill before the vote, Sen. Bryan Townsend said, "I hope we begin to treat as equals all those who wish to announce their love and commitment to the world."

Gov. Jack Markell will sign the bill, making Delaware the 11th state to recognize same-sex couples' marriage rights. The bill will go into effect on July 1, and all civil unions not converted to marriages or dissolved by July 1, 2014, will be automatically converted into marriages.

During the course of the afternoon, Sen. Karen Peterson came out publicly to her colleagues as a lesbian, discussing what the bill would do for her and her longtime partner.

Senator David P. Sokola, the bill's lead sponsor in the Senate, led debate for the supporters, including calling on Equality Delaware's leader, Mark Purpura. Purpura went through the bill, section by section, to explain its purposes.


From what I read on twitter, opponents of marriage equality seemed to employ a strategy of throwing mud on the wall and going with what stuck. At times,  their testimony seemed like a bad sketch from Monty Python as priests, pastors, religious right spokespeople, and legislators invoked portents of doom, spun inaccurate tales of anti-Christian discrimination, and even took to reading facebook comments.

But for the life of me, I don't know where Supreme Court Justice Sonia Sotomayor fit in it all because they even called her name.

It doesn't matter because the bill has passed and will most likely be signed today.

Editor's note - The following press release is a simple reminder that while lgbt organizations in South Carolina get little notice in the national lgbt press, they are going above and beyond the call of duty for the cause of equality:

Did you know? Only 5% of LGBT people give to LGBT Causes!

On May 9th, 2013, we invite you to be part of history and participate in the 1st national Give OUT Day for the Lesbian, Gay, Bisexual, Transgender  Queer community.

Give OUT Day is a new national initiative that aims to mobilize thousands of individual donors on a single day across the country to give in support of the LGBTQ nonprofit community. 406 organizations have joined together to celebrate Give Out Day. It will cover all 50 states, DC and Puerto Rico.You can make history by joining the first ever LGBTQ national day of giving by directly supporting services and programs here in South Carolina through these participating organizations:

On Thursday, May 9th, your help and support will expand our outreach & services to those who are most vulnerable, while giving us the opportunity to win more funding through this nationwide event.

Please also join us at our live benefit events on May 9th at the Social Bar (918 Gervais Street) from 6-10pm, or at the Capital Club (1002 Gervais Street) -- both in Columbia, SC.  More info at Give Out Day page on FB.

100% of donations collected will directly support our vital programs at the Harriet Hancock Center:

Rob Portman: ENDA Might Not Protect Anti-LGBT Religious Entities - And here I thought ENDA was supposed to protect the LGBT community. My mistake!

Delaware Gay Marriage Vote Coming, Would Make It 11th State To Allow Same-Sex Couples To Marry - Come on Delaware! I got my fingers crossed.

Illinois GOP Chairman Pat Brady resigns - Over the fact that he supported marriage equality. This is a hot shame!

Five Quick Facts You Should Know About Anne Paulk - Since John Paulk has renounced his 'ex-gay' mess, his former 'partner-in-crime' has been doubling down on the ugliness. 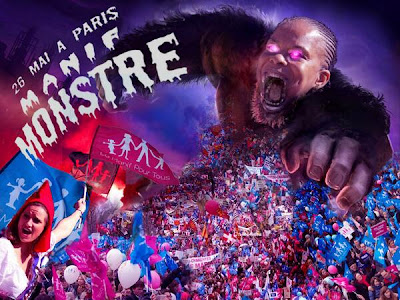 This poster, announcing the latest anti-marriage equality march in France, is now the subject of a HUGE racial controversy.  According to Euronews:

The poster, designed by an anti-same sex marriage activist, depicts France’s Minister of Justice Christiane Taubira, who is black, as a raging gorilla/King Kong, overwhelmed by a flow of demonstrators from the “Manif Pour Tous,” the main anti-same sex organization. The slogan is a play on words: “manif monstre” can mean ‘giant demo.’

The picture, posted on Monday night, was retweeted and commented massively by anti-gay rights activists and by both outraged anti- and pro-same sex marriage activists.

. . .  On Tuesday morning, the owner of the Twitter account where the picture was initially posted deleted it, before explaining: “I confirm that I acted on my own, without racist intention. Sorry if it has hurt. I withdraw the picture but it is a misunderstanding. I used an already existing monster picture.” To make further amends, he then retweeted a message from an official anti-same-sex marriage organisation stating “The only poster for the May 26 demo is this one.”

. . .  French Guiana-born Christiane Taubira is, as François Hollande’s Minister of Justice, the main proponent of the bill legalising same-sex marriage. She has been the target of a large majority of the slogans and banners from anti-same sex marriage demonstrators.


I wonder will NOM comment on this latest development.