Veterans dishonorably discharged for LGBTQ orientation to get full benefits 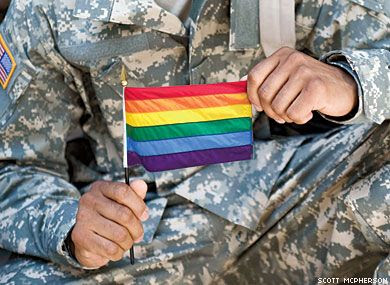 One would think that during the 10th anniversary of the repeal of Don't Ask Don't Tell, the following development would receive more attention. It's still good news. And let's not get all caught up in speeches.

Just break off those benefits.

LGBTQ veterans who were given other than honorable discharges from the U.S. military due to their sexual orientation are eligible to receive full benefits, the Department of Veterans Affairs announced on Monday.  "LGBTQ+ Veterans are not any less worthy of the care and services that all Veterans earn through their service, and VA is committed to making sure that they have equal access to those services," the department said in a statement.
The policy statement comes on the 10th anniversary of the repeal of the controversial 1993 law known as "don't ask, don't tell," which banned LGBTQ service members who were open about their sexual orientation from serving in the military. Overall, an estimated 100,000 were discharged from the U.S. military due to their sexual orientation, including an estimated 14,000 service members who were discharged under "don't ask, don't tell," during the 17 years that it was in effect, according to the VA.
"This historic move ends an unjust practice and creates a smoother pathway for life-saving benefits like healthcare, pensions, and housing assistance to finally go to the LGBTQ service members, as well as people with HIV, who were discharged during and before Don't Ask, Don't Tell only because of who they are," said GLAAD Chief Communications Officer Rich Ferraro in a statement. "On the ten year anniversary of the repeal of Don't Ask, Don't Tell, we've seen LGBTQ service members serve strong and proud and today's move from the VA will help so many LGBTQ and other veterans who were unjustly removed from service prior to the repeal."

Check out the ABC News article for the complete story.
I will say one thing, though. Voting matters. Do you really think that Trump would have done this if he had remained in the White House? Any LGBTQ American claiming that he and Biden are different sides of the same coin needs to have a seat.
Posted by BlackTsunami at 3:51 PM No comments:

U.K. Appeals Court Overturns Puberty Blockers Ban for Youth Under 16 - In case you didn't hear this wonderful news which took away a weapon the religious right was using to deny transgender children decent healthcare.

'Everybody’s Talking About Jamie' portrays a moving story about coming out — as a drag queen - I have been hearing wonderful things about this movie.

Would-be politician created video game where players shoot gay people at pride parades - The creator claims that game is not meant to be violent. Regardless, it sounds pretty damn tacky to me.