When defending Kavanaugh fails, attack Obama and his alleged girlfriends (and boyfriends)

While defending Trump's SCOTUS pick and accused assaulter of women Brett Kavanaugh, high and low profile Trump supporters are doing what they do best:

Pointing the finger at Obama.

Wayne Allyn Root, conservative radio and television personality and extreme Trump supporter who was recently the opening speaker for one of his rallies, sent out the following tweet today: 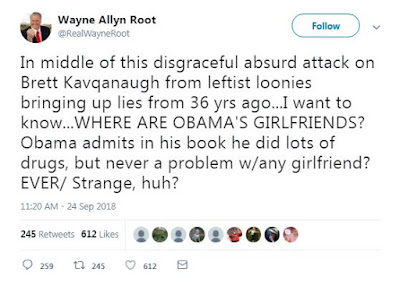 The vast majority of those who tweeted back rightfully poked fun at Allyn's silly whataboutism and attempt to drag Obama into this mess.  Generally, folks pointed out that the situation had nothing to do with Obama and that the former president is a decent person who respects women.

Then there were those who agreed with Root's tweet.

Read more »
Posted by BlackTsunami at 5:08 PM No comments: 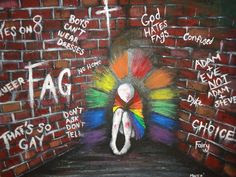 LGB Youth at ‘Increased Risk’ of Substance Abuse. Blame Homophobia. - We keep telling folks this and the religious right & conservative groups keep pushing this aside.

We could have used a trans survival guide growing up: By writing one we hope to make today’s teens feel proud of who they are - And we will not forget out transgender children either. ALL of our LGBTQ kids must be protected and lifted up.

Thousands of students walked out of school to protest sex ed classes that don’t include gays - A step in the right direction of alleviating the problem in the above news brief.

Sandy Rios: Marriage Equality Is A ‘Fist Of Defiance’ In God’s Face - Can't these folks think of a more original insult?