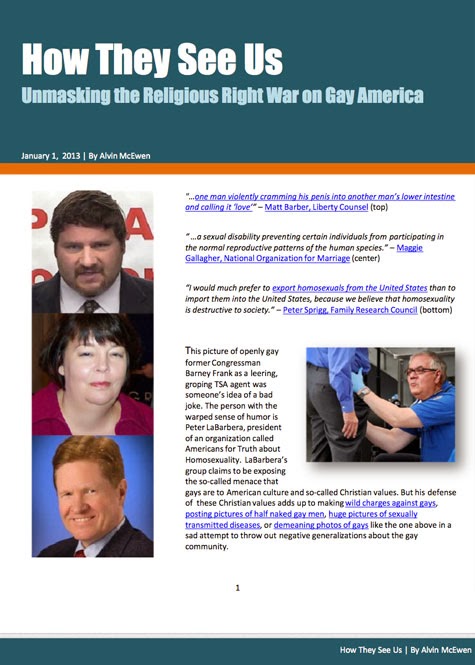 A year ago around this time, I was working hard to complete what I called my most ambitious project.

How They See Us: Unmasking the Religious Right War on Gay America was to be a controversial and distinctive booklet taking a graphics-intensive look at anti-gay rhetoric and dispel the notion that attacks on the lgbt community are merely of a religious nature.

It was to be completed by January 8th and thanks to the help of friends (thank you Joe Sudbay and Van Le), it met the deadline.

Subsequently, I spent the rest of 2013 promoting the booklet as best I could via press releases, constant tweets, reliance on good friends who also sent the word out, blogs who either wrote about it or embedded it on their sites, radio interviews,  passing out hard copies at pride events (thank you David Stewart, Joe Sudbay, Michael Carr, Charley Dodd, Sandra Elaine McGee Thomas, Eddie Thompson, and Jayson Myers), and whatever else I could think of. 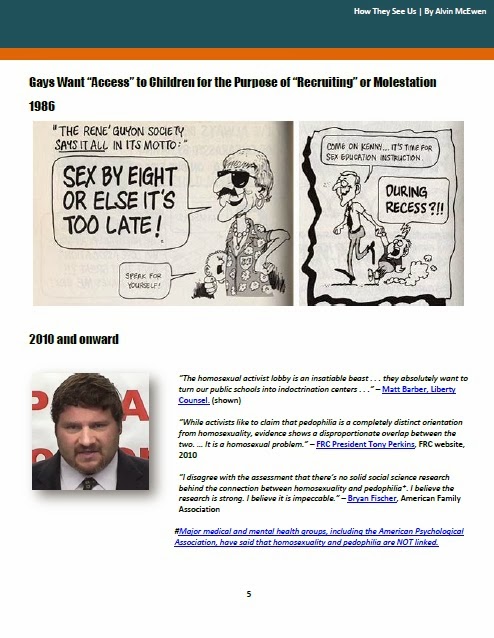 reads), and close to 100 copies either given out or emailed to interested individuals, the booklet is a huge success.

Of course it was not without its problems. A major problem was  generating press from the the lgbt and mainstream press. I'm not exactly a Sue Mengers type press agent. Plus, to some people, the issue of anti-gay propaganda isn't exciting as other issues which dominated the lgbt media this year.

I haven't figured out what I am going to do to celebrate the anniversary of How They See Us, that is if I do any celebration at all. However, I hope to have very good news by the middle of January. I'm not at liberty to say what it is as of yet, but please keep your fingers crossed and pray for good news.

To the right is an embedded copy of How They See Us. Enjoy reading it, if you have a blog, feel free to embed it, and if you wish to download it,  please do so because it's free. However,  should you have any problems at all with the downloading, email me at charlekenghis@aol.com and I will email you an adobe acrobat copy.  Just put the words "anti-gay propaganda booklet" in the subject line.

And thank you all for your support. This project would not have been successful without you.
Posted by BlackTsunami at 7:59 PM 1 comment: