As we all know, a certain performance during Macy's Thanksgiving Day parade of the Tony-award-winning musical 'Kinky Boots' sent some conservatives and religious right talking heads into orbit.

But hands down, the most hysterical response regarding this non-controversy had to come from Austin Ruse, president of The Catholic Family & Human Rights Institute (C-FAM). According to Right Wing Watch, as he guest-hosted on the American Family Association's radio show today, Ruse went on and on about how children will be hurt by this performance. On second thought, that's putting it mildly:


There is pathologically homophobic and then there is hysterical and when I say that Ruse crossed both lines, I am not exaggerating. Ruse, who obviously has not even seen the show, made the performance segment sound less like what it was and more like an alien invasion out of the Twilight Zone.

It really wasn't that bad. In fact all of the controversy actually worked out in favor of 'Kinky Boots.' According to the Huffington Post, it "smashed ticket sale records."

And I wouldn't be shocked if Ruse comes around looking for a cut of the proceeds.

Posted by BlackTsunami at 3:22 PM 4 comments:

'The Passion of Dan Choi' and other Monday midday news briefs

The Passion of Dan Choi - As easily the most recognizable face in the fight to overturn DADT, Dan Choi became an lgbt icon. This is the price he paid for his activism and fame.

How The Pacific Justice Institute Plans To Continue Demonizing Transgender Children - No one can tell me that this is Christian behavior.

The 2013 POZ 100: Celebrating Unsung Heroes Fighting To End HIV/AIDS - Easily some of the most awesome people I've read about.
Posted by BlackTsunami at 8:56 AM 1 comment: 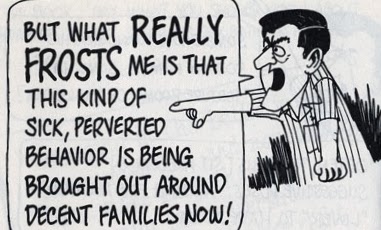 I received a response to a comment I made in July on a Charisma Magazine online article entitled Why Gays Hate Christians by a writer named David Aikman. The following is the original comment:

Gays do not hate Christians but we are alarmed by the false information put out about us by some folks who call themselves Christians. Mr. Aikman's piece is a perfect example of this.

For example, this sentence - "Life expectancy can be up to 20 years shorter than for the heterosexual population, almost entirely as a result of sexually transmitted diseases." This is a false statement based upon two studies. One is by a discredited researcher by the name of Paul Cameron. The other is from a 1997 Oxford study. In 2001, the authors of the study publicly complained that their work was being distorted to push the false notion that gays live 20 years less than the heterosexual community.

Another distortion is the following - "Depression, attempted suicide and drug abuse are significantly higher among gays and lesbians." Mr. Aikman practices the sin of omission there. The Centers for Disease Control has said when gays suffer from these defects, it is because of a homophobic society and the lack of a support system to deal with the homophobic society.The other claim Mr. Aikman makes about the Netherlands comes from a cherry-picked study by Dr. Theo Sandfort.

The problem is that a lot of well-meaning Christians are being bamboozled by people putting out junk science and cherry-picked research about the gay community. That's the problem here.

According to the center for Disease Control & Prevention (CDC), HIV/AIDS rate was at 63% among MSM (men who have sex with men) in the USA in 2010. Another one-third are also infected, but won't know it until they become chronically ill. This is an 81% infection rate. I wonder what it will be in another ten years or so? As unprotected sex is common among MSM, how many other people are being unknowingly infected? MSM are 44 times more likely to acquire the virus than heterosexuals, with the highest risk group being young men between the ages of 13 to 19. Think about that. Who is infecting 13 year old boys with HIV/AIDS? The CDC has further stated that most college-age males will be dead before they reach 50. Other diseases and infections seem to affect MSM more than any other group. Anal cancer is spreading among MSM by 3% per year, and MSM in Vancouver, Canada, are responsible for 95% of all syphilis cases. This is quite simply horrifying, given their tiny numbers. Indeed, most MSM are lucky to reach 65. Even in countries where GBLT rights are fully protected, they still suffer from a higher percentage of mental health issues, addiction problems and shortened lifespans than do heterosexuals. How many gays and lesbians over 80 do you know? The Bible has made it explicitly clear: To engage in unnatural sexual relations has serious, even deadly consequences (Romans 1:27). But quoting from scripture is almost a hate crime these days, isn't it?


Apparently, Mr. Spade didn't read my original response as he should have. But there was something I found interesting in his response and told him so:

It's a matter of seeing what you want, Sam. According to the same Centers for Disease Control, the lgbt orientation is not the root cause of these things. The CDC has said that the root cause of these things, particularly in lgbt youth, is a homophobic society and lack of decent support systems. Lgbt youth who are bombarded with negative images without any positive reinforcement are more likely to engage in bad behaviors. I really think you should come clean. You did not receive your information from the Centers for Disease Control, but rather a supposedly religious webpage or organization which cherry-picks CDC information. I recognized the phrase "Even in countries where GBLT rights are fully protected, they still suffer from a higher percentage of mental health issues, addiction problems and shortened lifespans than do heterosexuals."

That phraseology exists in many anti-gay studies but strangely NO objective studies regarding lgbt health. In addition, there are NO studies which claim that gays have a shorter lifespan than heterosexuals. The CDC has acknowledged this and don't EVEN try to pull out that 1997 Canadian study because the authors have steadily complained about how it has been distorted by the religious right. - http://www.politifact.com/virg...

While the Bible is not as clear as you think about homosexuality, it is VERY clear about false information and bearing false witness. Perhaps you need to consult objective sources before putting stuff out here.


The problem was that "Sam Spade" (and Mr. Aikman for that matter) seemed to have derived their data, not from objective sites, but religious right sites which freely cherry-pick information, making sure to highlight negative lgbt information and eliminate the information which refutes the negativity they are trying to illuminate.

It has always been my belief that the lgbt community's roadblock when it comes to reaching equality is not necessarily religious folks who believe that homosexuality is a sin, but rather the organizations (i.e. the Family Research Council, the American Family Association, the National Organization for Marriage, etc) who exploit the beliefs of these individuals by giving them inaccurate, negative information about lgbts. This information is designed to cater to their ego and exploit their beliefs about homosexuality.

Refuting Aikman and "Sam Spade," while gratifying, doesn't get us to the root cause. When we begin to take the initiative to call out the instigators of propaganda rather than their pawns, that's when we will begin to see more progress.
Posted by BlackTsunami at 4:49 AM No comments: