Religious right supporters refuse to believe the obvious about Trump

The American Family Association's fake news site, One News Now, seems to be successful in its practice of pushing phony positive articles about Trump..

The following was the latest poll accompanying the latest "Trump isn't as bad as the liberal media has him out to be" article: 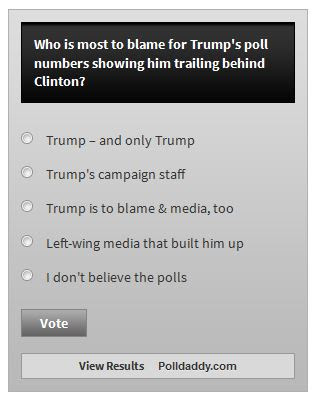 After I voted, the following were the results: 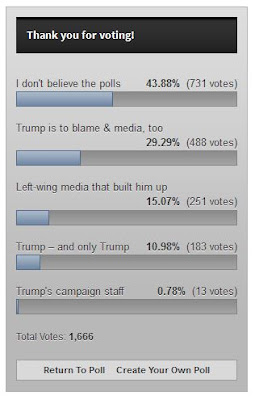 The poor dears. Well that's one delusion I strongly agree with them having. Just as long as the rest of us who don't want Trump to win keep up the momentum and not fall victim to complacency
Posted by BlackTsunami at 3:04 PM 1 comment:


Here's What We Can Learn From Tracey 'Africa' Norman's Triumphant Return to Modeling - I read this story and felt it needed a wider audience as possible. I love the fact that in this case, a pioneer in the lgbt community who suffered because of ignorance makes an awesome comeback. The first African-American openly transgender model proves the adage that "black don't crack."


Queer, Brown, Muslim — And Constantly Under Attack - More attention should be focused on our Muslim lgbt brothers and sisters, particularly in times like these.

Prominent gay Republicans urge RNC to stop funding Trump -Good luck in your attempts to stop THAT train, my brother.

San Antonio to Fight Anti-LGBT Legislation That Could Cost It 2018 Final Four - As always, money talks . . .

Inside Marco Rubio's Desperate Fake Support for LGBT Rights - which most of us could tell was fake from miles away.


Photo taken from Advertising Age
Posted by BlackTsunami at 9:12 AM No comments:

Homophobia only scratches the surface with Trump's 'Kitchen Cabinet'

The people Trump has selected to get him in the White House are a motley crew of bottom feeding, racist, Islamophobic individuals. The fact that many of them are also homophobic is shockingly - or not so shockingly - something which could get lost in the shuffle. But it shouldn't be because their homophobia runs deep. 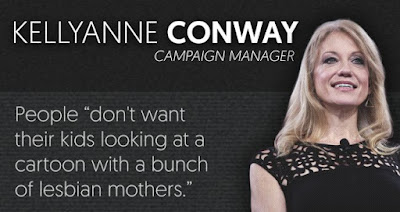 Kellyanne Conway served as a senior adviser and pollster for the Trump campaign, and was recently named campaign manager.

What You Need To Know

Conway has long been involved in conservative politics, mostly as a pollster working with conservative groups like the NRA, Family Research Council and Republican candidates like Newt Gingrich and Michele Bachmann.

Conway once said that people “don’t want their kids looking at a cartoon with a bunch of lesbian mothers” and suggested the representation of same-sex parents in children’s programming was a “corrupting” influence.” She also once argued that “political correctness” could create a situation where there were “air traffic controllers who don’t speak great English” leading to “two planes crashing in the sky.” She also argued that “revulsion towards men” is “part and parcel of the feminist movement” and that “baby girls [are] being killed just because they’re girls” in America.


And that only scratches the surface. Check out more info on Media Matters or Towleroad.
Posted by BlackTsunami at 4:56 AM No comments: