Alabama marriage equality tantrum slap in the face to all Americans 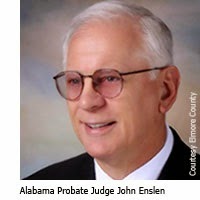 
Alabama Probate Judge John Enslen  thinks that not only his personal religious beliefs supersedes federal law and the rights of United States citizens who fairly win their court cases, but also mandates that he should get away with the dereliction of his sworn duty on the taxpayer's dime, even if some of those taxpayers are the people whose rights he is deliberately ignoring.

Regardless how anyone feels about marriage equality, it is an issue which is being decided fairly by the federal courts. We are not a theocracy but a secular nation of laws - - laws whose constitutionality are generally decided in the courts. Those states who oppose marriage equality have been unable to provide proof as to the constitutionality of their laws. Plain and simple. That's why they are losing. In spite of all of their rhetoric about "activist judges" and "black robed tyrants," those against marriage equality have provided no proof that any chicanery has been going on. Heck, they can't provided proof that their policies against marriage equality is sound. That's why they are throwing tantrums now. Because they don't have any other options.

But this next step Probate Justice Enslen, and a few other judges in Alabama are taking is dangerous to not only the rights of same-sex couples, but all United States citizens.

If this mockery of our legal system is not contained now, we are going to see lots of trouble in the future . . . and with other things besides marriage equality.

Exploiting your religious faith to get your way when you lose in federal court is not American. And it's certainly not Christian.

Posted by BlackTsunami at 8:32 PM 4 comments:

For the most part (we still have to work on a couple of things), marriage equality has successfully come to Alabama.

Seeing that his plan failed, Moore posted an unbelievably vicious post on Facebook. It has since been taken down but Right Wing Watch saved a copy of it: 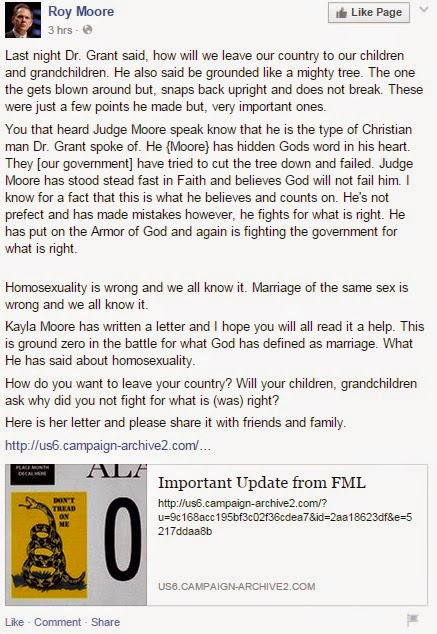 And apparently he wasn't done yet:

Moore also posted a statement from his wife, Kayla, who leads the Foundation for Moral Law, a legal group founded by Moore. Kayla Moore’s statement cites Leviticus to condemn homosexuality as an abomination and slam the federal court’s ruling.

“Founded by Chief Justice Roy Moore, The Foundation for Moral Law's goal is to be the sword of the spirit for Christians all over who don't want to see Alabama or America become the next Sodom and Gomorrah,” she said. “We will continue our battle against evil, and judicial immorality.”


She called on gay people and their allies to turn away from their “sexual lust” and turn to God:

“Today the sacred institution of marriage is being destroyed by the LGBT community and liberal politicians who ‘want change’ as did our President; and they make their rulings based on their emotions and not law. Every human being wants to find meaning in their life, some find it in religion, some find it in material things, certain people find it in sexual lust; however, all they need is Jesus Christ. We as Christians do not condemn homosexuals; instead we point them toward eternal life through Christ Jesus.”

I know there is an eagerness to call Moore and his wife names and laugh at their folly. However, let's be analytical about this. Moore actually did us a favor.

People on his side of the argument have been careful to shield the simple fact that their disagreement with marriage equality is one deriving from simple homophobia.

"It's about protecting marriage," they say to us. "We have no problems with homosexuals living the way they want, but they have no right to redefine marriage for the rest of us."

Moore proves that  behind the careful rhetoric and talking points, the disagreement with marriage equality has always been about animus against the lgbt community.

Animus and homophobia can't stand up in court and that's the reason why Moore's side is losing the argument in the courts.
Posted by BlackTsunami at 2:17 PM 2 comments:

Supreme Court Refuses To Stop Gay Marriages In Alabama - In the words of a good friend of mine - "Roy Moore, your face is cracked . . . and on the ground."


Same-Sex Couples Begin Marrying In Alabama After U.S. Supreme Court Action - More information regarding what just happened in Alabama, including pictures of the happy couples getting married. This is soooo cool!

Judge Hands Alabama Same-Sex Couple Roy Moore's Order Instead Of Marriage License - HOWEVER, there are some judges who need to get with the program.

Southern Poverty Law Center Adds Ben Carson To List As An Anti-LGBT Extremist - About time, too. Carson has been losing his mind.

Sam Smith conquers Grammys with four top awards - Let's not forget last night's very significant moment. An openly gay young singer wins four Grammys and pretty much everyone is happy. Wouldn't have happened when I WAS Sam Smith's age.
Posted by BlackTsunami at 8:53 AM No comments: