Paul Cameron wants gays to go through 'public shaming' . . . amongst other things 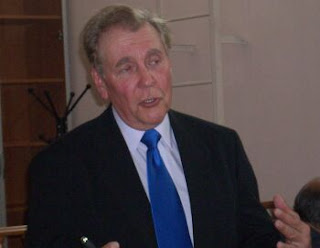 Discredited anti-gay researcher and noted homophobe Paul Cameron has gone on record about the classification of his group, the Family Research Institute, as a hate group by the Southern Poverty Law Center.

It was during a very poor interview with the Colorado Springs Gazette. I say the interview was poor because the writer didn't give any detail about Cameron's dubious history of censures and rebukes by folks from legitimate medical organizations to conservative talking heads.

Of course in the writer's defense, he or she really didn't need to. Cameron came across in the interview as batshit crazy in spite of the fact that, according to the writer, he "dressed smart and had impeccable manners" and also discussed his views in a "calm, professional manner."

But how Cameron looks or professes his views is irrelevant. You really have to read some of what Cameron said:

God’s 11th Commandment is “Thou shalt not corrupt boys,” Cameron told me. He celebrated the Ugandan anti-gay bill, in which the penalty for gay activity could be death. “Whatever they decide, I’m OK with,” he said.

Cameron believes homosexuality should be criminalized in America. He proposes heavily taxing single American adults and homosexuals because of their failure to procreate. He would also like to see gays undergo a “public shaming,” though he offered no specifics.

The article also revealed some very interesting things about Cameron's group. It's run out of his home (why am I not surprised), run by private donations, has only four staffers, and has a budget of $85,000.

Now that last one really threw me. Who in the hell would donate money to this loon?

It's gets better. Cameron said the classification of his organization as a hate group by SPLC was a "left-wing" deal.

I would have loved for the writer to have questioned him about the lie he told in 1982 about a child being castrated in a public restroom by a gay man. Or that comment he made to Rolling Stone magazine about homosexuality providing one with "most satisfying orgasm one could get."

Oh well. Where the writer failed to do his or her job, Cameron definitely took up the slack:

The gay lifestyle, which he says is chosen, will lead to the destruction of the West. “Liberal minds are attracted to societal destructive things like moth to a light,” he told me. “No society can long endure that does such a thing.”

“If God has changed his mind (about homosexuality being an abomination, as written in the Bible), he must want the West to die.”

It's almost hard to believe that Cameron used to be the go-to guy for all anti-gay material used by the religious right. And if it weren't for the attention he has been receiving of late, he probably would still be.

And that is probably the main reason why those named as anti-gay hate groups, and their defenders, want to deflect the controversy to one about same-sex marriage. They are afraid to be questioned about their past affiliation with Cameron.

To be honest, I really can't blame them. Cameron is just plain crazy.

Posted by BlackTsunami at 7:13 PM 2 comments: Links to this post

I bet it seemed like a good idea at the time to those who voted for a bill pushed by El Paso, TX pastor Tom Brown to rescind health benefits afforded to domestic partners (including of course lgbt couples.)

Then they got caught in their own homophobic trap. From Think Progress:

Last year, the El Paso, Texas City Council voted 7-1 to extend city employee health benefits to their domestic partners, including LGBT couples. But while many celebrated the progressive move, the right-wing El Paso Word of Life Church’s Pastor — and self-advertised exorcist — Tom Brown slammed the council for “condoning immorality” and giving “a huge black eye to democracy.” Incensed over the idea of equal treatment, Brown spearheaded a ballot initiative to rescind these benefits, which passed this November by a 55 percent majority.

But, in his eagerness to rob gay and unmarried partners of their health benefits, Brown’s group quickly drew up the bill “wording on its own” because he “could not find a lawyer” to advise. By doing so, Brown’s blow to equal rights also doles a “black eye” to 200 El Paso retirees and public servants who will now lose their health benefits on Jan. 1 too:


[City Attorney Charlie] McNabb said his office had identified 200 people who would lose benefits under the language of the referendum that voters approved by a 55-45 percent ratio.

Only 19 gay and unmarried partners of city employees receive benefits under the ordinance voters rejected last week. But McNabb’s staff found that some retirees and others would lose their benefits because of the wording of the ballot issue.[...]

Some are spouses of deceased city employees and some are retirees with other jobs. Still others work for city agencies such as the Public Service Board and the 911 district but are not legally city employees.

Not only same-sex and unmarried partners, but employees of the 911 call center, retired firefighters, retired policemen, and even foster children will lose health benefits because of Brown’s bigotry. While admitting that he only intended to strip the 19 same-sex couples of their benefits, Brown said he has “no regrets” for doing “what was right,” and that city officials “have to respect the will of the public.”

That my friends is the root end of hatred, be it homophobia, racism, or sexism. It's like an ugly wildfire and sooner or later, if not stopped, engulfs everyone.

Get off your butts and call your Senators about DADT! and other Tuesday midday news briefs

DADT repeal vote could come today. The blogsphere has been going crazy over this. From Americablog Gay:

SLDN. The switchboard at the Senate is 202-224-3121. If you live in the state's of any of these Senators call them ASAP. Tell them to put equality over procedure. Senator Collins is key. If she won't support us -- having voted for DADT repeal in Committee -- it will be hard to get others. So, all you Mainers, get on the phone.

KEY SENATORS WHO NEED TO HEAR FROM REPEAL SUPPORTERS NOW:

If you want some guidance on calling, SLDN has a sample script here.

Religious Right Tries to Marginalize SPLC - This makes it official - The religious right are SCARED of the Southern Poverty Law Center.

Homosexuality in Leviticus - The Washington Post does right by the lgbt community (finally) by inviting The Rt. Rev. V. Gene Robinson, Episcopal Bishop of New Hampshire to write an excellent piece on those Biblical verses about homosexuality and the need for context.

Posted by BlackTsunami at 8:57 AM No comments: Links to this post

Rebecca Hagelin, a member of the Heritage Foundation, a conservative think tank (Washington, D.C. seems to collect think tanks like a dog collects fleas) gave her opinion of the controversy in a Town Hall column, Culture Challenge of the Week: Playing the Hate Card.

You can read it if you, but allow me to break it down. The following opening is the gist of the entire column:

Children know instinctively that “hate” is a bad thing. And they understand that hating a classmate, teacher, or neighbor is nothing like “hating” the broccoli on the dinner plate. Real hate is a deliberate choice: it wishes evil and foments dark, angry feelings towards another person. And ultimately, it extinguishes any light and all love from the hater’s heart.

It’s a serious thing, hate is. And America’s own tangled history of racial prejudice, fueled by unfamiliarity and ignorance, serves as a cultural memory of the power of hate.

So it was a shocking turn of events last week when the Southern Poverty Law Center (SPLC), a long-standing civil rights group, added more than a dozen new organizations to their list of hate-mongering groups. Neo-Nazis? KKK-spin-offs? Muslim or Jew-haters? No. The new “haters,” in this era of sexual license, are those who maintain that marriage has an intrinsic meaning--the union of man and woman--that simply cannot be extended to homosexual couplings. Crying “hate speech,” the SPLC denounced “anti-gay” groups for spreading “falsehoods” that say children do best when raised by a mom and a dad, as opposed to two dads or two moms. “Falsehoods” that support traditional marriage are now “hate speech,” thrown into the same filthy bucket as KKK and Neo-Nazi ideology.

Hagelin is attempting to sell folks a weak Hollandaise sauce and stale toast claim that these groups are supposedly being unfairly silenced or "victimized."

Nowhere in her piece did Hagelin address the real reason why SPLC considered these organizations as hate groups:

Even as some well-known anti-gay groups like Focus on the Family moderate their views, a hard core of smaller groups, most of them religiously motivated, have continued to pump out demonizing propaganda aimed at homosexuals and other sexual minorities. These groups’ influence reaches far beyond what their size would suggest, because the “facts” they disseminate about homosexuality are often amplified by certain politicians, other groups and even news organizations. Of the 18 groups profiled below, the Southern Poverty Law Center (SPLC) will be listing 13 next year as hate groups (eight were previously listed), reflecting further research into their views; those are each marked with an asterisk. Generally, the SPLC’s listings of these groups is based on their propagation of known falsehoods — claims about LGBT people that have been thoroughly discredited by scientific authorities — and repeated, groundless name-calling. Viewing homosexuality as unbiblical does not qualify organizations for listing as hate groups.

Hagelin's omission is intentional and it reveals the game plan on the part of those condemning SPLC for standing up to these groups.

They are sidestepping the credible reasons why SPLC has a beef with these groups (i.e. the usage of junk science, the pushing of known lies to smear the lgbt community) in an attempt to make the controversy about a backlash regarding gay marriage.

Of course this notion is false and Hagelin as well as others who would defend these anti-gay hate groups on these grounds know this.

But I guess when you are in the business of lying about the lgbt community, being deceptive in general comes easy to you.